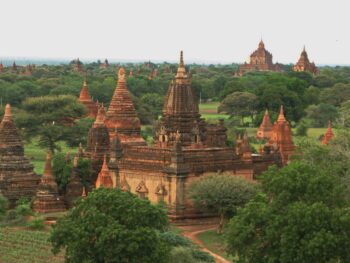 Research into Burmese Transitional Architecture Mon – Pyu – Pagan Period from the 7th – 9th century AD., is assumed that the Mon were most likely to have been the most culturally advanced people in the South-Western part of South East Asia. Early Mon culture was heavily influenced by both the cultural and religious beliefs of their northern Indian neighbors across the Bay of Bengal, more so than their immediate neighbors the Pyu whose civilization came to a slow demise starting from the end of the 9th century until the 11th century.

Architectural monuments from the Mon and Pyu civilizations included characteristically shaped stupa’s, sculptures in bronze and stone, and minor arts were executed with a high degree of skill. Some of the stone sculptures show characteristics similar to the late Gupta or post Gupta style.

During the reign of king Anawrahta, unprecedented cultural and religious developments took place. A large number of monuments were built as well as a huge number of high quality sculptures and wall murals, many have survived until present times. The Pagan period is regarded as the greatest period in the history of Myanmar art and architecture.

There is inscriptional proof that at least one of the earliest kings, Caw Rahan (956-1001), set up religious buildings in or near Pagan.

According to modern chronicles they represent King Caw Rahan as an heretic, a worshiper of Naga and spirits, as well as being a follower of the Ari sect. The original inscriptions on the other hand, shows him as a man who achieved a lot of merit for his commitment to building Buddhist places of worship. All agree that he was a builder and the buildings that were attributed to him stood for more than 200 years and were likely made of brick or stone, assuming that this is correct the age of Burmese temple builders did not begin with Anawrahta. Referenced “Old Burma-Early Pagan” by Gordon H. Luce. King Caw Rahan died forty three years before Anawrahta’s accession.

Historical developments of architecture between the Mon, Pyu and Pagan Period

The main materials used in Pagan architecture were brick, stone and wood, with wood being the least used except for a few images, carvings, some lattice doors, sanctum rails and lintels of which little remain in present times.

Brick was also used in Pagan, but whether it was large or small, it didn’t compare with the large bricks used by the Pyu in their buildings at Sri Ksetra. The size varied a good deal, the average may be about 14″ X 7″ X 2″, also varying in quality, sometimes it awas sandy and crumbled easily, sometime excellent.

The average quality of brick must have been very good to bear the dead-weight of many of these temples and pagodas which were anywhere from 150 to 200 feet in height. The idea of using brick was probably adopted from the Buddhists of India.

Brick does not lend itself easily to carving, but both Mon and Burman used them, usually overlaying them with stucco, both for architectural detail (especially the Pediment), but rarely for figural sculptures. In the Nat-Hlaung-Gyaung, the standing Visnus on the inner corridor are carved in brick.

At Pagan, stone was very rarely used for whole the buildings except in Kyaukse on the edge of the hills and only in the older monuments of the Mon period. King Kyanzittha’s Library was perhaps the only known building east of the Arakan Yaraa wholly built of stone. Stone was also commonly used to strengthen brick work, especially on the corners and arches.

Stone was used also for small images and lotus-thrones, for model stupas placed in relic chamber, for stair ramps, bell pillars, large votive alms bowls and umbrellas for door sills as well as for pavements, the tops of parapets, boundaries and stone pillars and inscriptions.

After the Pagan period Myanmar turned away from the influence of India and was directed more to the Far East for inspiration. Their architecture was then influenced by the Chinese, examples of this influence can be found in Mekkhaya, Sagaing, Amarapura and Ava, but due to the poor quality of workmanship most are in ruins.

From the 15th century there developed a more important distinctive feature in architecture commonly referred to as the Pagoda period. The most famous example of this is the Shwedagon Pagoda, the Palace of Mandalay and the Monasteries in Mandalay such as the Queens Golden monastery. 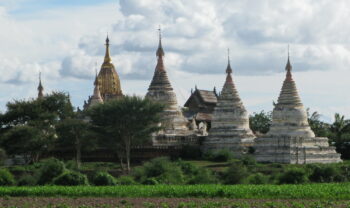 The architectural treatment of stupas and temples is much the same, the difference lies largely in that of intention. The stupa is pre-Buddhist in origin and was simply a grave-mound, made of earth or stone, heaped over a dead body or the ashes of a deceased. The stupa itself is a reminder of Nibbana, whether or not it contains relics, it is thought of as reliquary. When there is a pyramidal base it is reminiscent of the cosmology of the Hindu’s in India, who were fascinated by a lofty mountain. 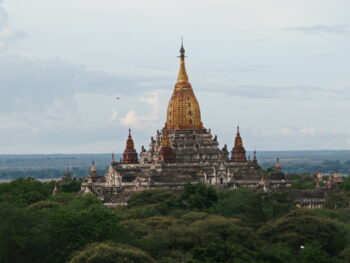 The temple is planned with its interior arrangements consisting of galleries and corridors to accommodate religious ceremonies. Such were the primary attributions of these two types of structures, but in the course of time the Buddhist temple began to combine a twofold purpose. The central block took the form of a great shrine with interior corridors surrounding it for circumambulation and processions.

In the whole of the architecture of this great region lying between India and China, exemplified particularly in the buildings in Burma, there appears to have been a continual struggle for supremacy between the bulbous mass of the orthodox stupa combined with the outward curve of the Indo-Aryan Shikhara on the one hand, and the ascending attenuated outlines of what is ordinarily known as the Chinese pagoda on the other. 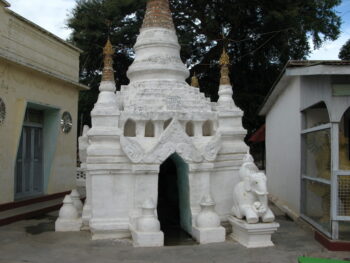 In Myanmar anything that serves to recall the Buddha and his doctrine is a Cetiya, a “Reminder”. In a broad sense the term include the scenes of Great Events of his lifetime, his bodily relics and the monuments built to contain them, records of his words, pictures or images of his person and replicas of any of these things.

The Cetiya’s proper function is to “Remind”, this it sometimes does by means of didactic objects arranged around its base, such as plaques illustrating the Previous Lives (Jataka). The term cetiya is more or less interchangeable with stupa (Pali- Thupa), a mound of earth or masonry built to contain holy relics. But it is convenient to call the entire monument a cetiya, and the word stupa is reserved for its for its essential part, a solid structure whose form varies from a low rounded dome to a hemisphere, a bell shape or even a bulb. Its stands on a base which may be very elaborate and is surmounted by a stylized honorific parasol. Sometimes between the stupa and parasol, there is a box like object called the harmika.

The costly and brilliant part of the Ceti was the metal finial (old Burmese at’wat). This word is Tibeto-Burman, meaning a ‘crown’. The same word is used for the top part of a temple (Skt. Sikkhara and Pali Thupika). It was usually made of a mixture of gold, mercury and copper, but now it is made of iron and gilded.

The Mon preferred purer copper, whereas during the Pagan period they preferred iron. An Umbrella pole want down the middle of the ceti or at’wat, and was held at the base by the harmika, spreading out at the top into an Umbrella. The word for the pole, yatthi is referred to in Burmese as Hti, (old Burmese t’i ).

The umbrella is now used in architecture to comprise the whole spire, especially the metal finial. The harmika, with its square “fence” (Skt. Vedika) was a feature of the Asoka stupa. At Pagan, from Cansu II’s reign onward, if not before, the Sinhalese type of pagoda, with harmika is to be found. But on the stupa at Sri ksetra, the harmika was sometimes omitted. 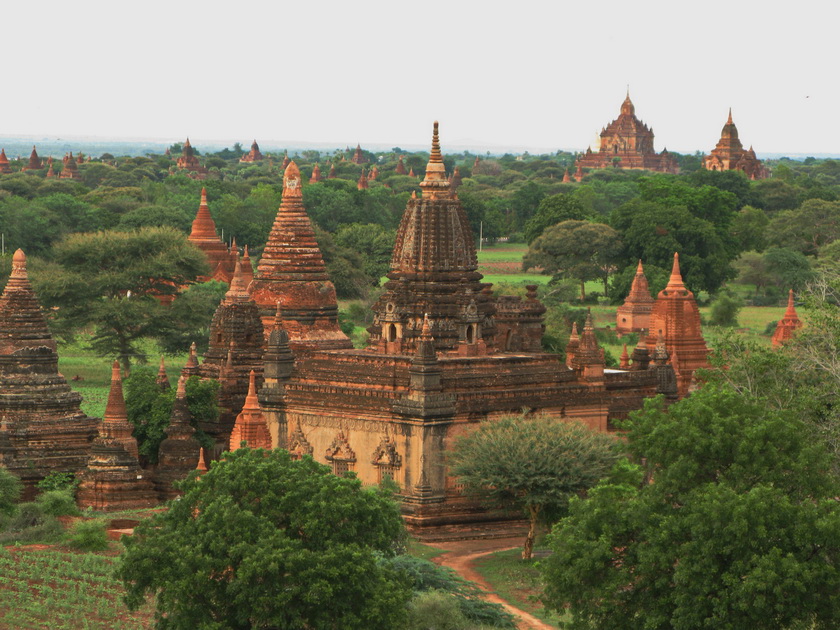