The Nagas in Buddhism and Hinduism

The Nagas in Buddhism and Hinduism – According to Rāmāyaṇa, the Nāgas (Scythians) were not Serpents, but people only less civilized than the Āryans, who worshiped Serpents, and had the figures of snakes for their emblems. The history of Tamil Nādu described the Nāgas as the people of Serpent worshipers. And it is believed that the name of a person and a serpent is the same in the field of the ‘Nāga’ totem, the man nominated the serpent, and based on the totem they become the lineage of that serpent. Both views held that the Nāgas were the peoples of the Serpent’s worshipers, and they have the Snake emblem. Some scholars gave different views to referring to the Nāgas in both geographical and race identification.

Buddhism has accepted these terms synonymously and has a description about their hoods that the Nāgarājas (male Nāga) are all having three or more hoods while the Nāginīs (female Nāga) have only singlehood. In both religions, the name Nāga is usually referred to as “Snake God” or “Serpent God”. The Sanskrit word Nāga means either a ‘Snake’ or ‘cobra’, said to be derived from Nāga, which means a mountain, tree, or a living entity with a snake-like body. The term Nāga is also applied to the Arhant and it is often used as an epithet of the Buddha and Arahants in Buddhism. Both religions agreed that Nāgas are “people” in some of the dialects of the hill tribes, and the Nāgas were the people or race of the aboriginal Serpent worshippers who adopted the hooded serpent for their tribal ensign.

Buddha had shown a way to repentant Nāgas who had a strong desire to be born as humans. According to Buddhist literature, the intellectual capabilities of the Nāgas were in a high order thereby Buddha greatly esteemed them.

Buddhism also confirms the bad karmas (evil deeds) of Nāgas in their present birth, and consequently, in the next birth, they are born with defects such as blindness, heart problems, etc. Even though the Nāga was blind to its evil deeds, it recognized the Lord Buddha’s achievement in attaining enlightenment due to the sound of his feet while he walked and the Nāga praised Buddha with love and affection. The Buddha stopped the civil war among the Nāgas and re-established peace between them.

At the end of Buddha’s life, the Nāgas were ready to face the risks of collecting Buddha’s Relics, and with great respect to the Buddha when a stupa was erected, they are given the status of guardians. Today in both Hindu and Buddhist iconography the Naga or serpent is seen at the entrance to temples, with its body snaking its way down the side of steps, along rooflines, and balustrades.

The nagas believe that it is a pious opportunity to worship and guard the Stupa to make up for their former evil karmas. Nagas invited the Buddhist sages and saints to come and dwell in the areas adjoining the Stupas to receive the religious offerings of the Nagas.

The well-popularised term ‘Nāga- Buddha’ clearly indicates the acceptance of Buddha by the Nāgas. Sometimes Nagas are represented as the saviors of the Buddha. The Nagas are considered the vehicles of the origin and development of the Mahayana school of Buddhism.

The Prajnaparamita Sutras is the sacred book of Mahayanist which is delivered by the Lord Buddha to his disciples but as the world was not ready for them, they were hidden in an underwater cave guarded by the Nagas until Nagarjuna a second-century Indian Mahayana Buddhist scholar and philosopher discovered them and with the agreement of the Buddha the Nagas released them to him.

The discovery of the Prajnaparamita Sutras, one of the oldest of the Mahayana Sutras is considered the second of the “Three Turnings of the Dharma Wheel”.

Considering the early Buddhist stories of the Nāgas, in Buddhism and Hinduism, the beliefs are similar and invariably end in the submission and conversion of the Nāgas. The Nāgas were invariably represented either as worshippers of Buddha or as hostile to the Buddha at first until they were gradually converted by Buddha’s teaching.

The Three Gunas (characteristics) of the Naga

Buddhist mythology doesn’t provide any information about the Nāga’s mythological origin but gives a description of their hoods. Nāgas are represented as hooded snakes or as snakes with human heads, or as human beings with the hood of a cobra, and its gigantic size.

Nagarajakulani – The four royal tribes of the Nagas

Some Buddhist writers mention the five types of Nāgas in Buddhism, Serpent Dragons, Lizard Dragons, Fish Dragons, Elephant Dragons, and Toad Dragons; The two sorts of Nāgarājas the Sanskrit name for a deity (King of the nagas), are those who practice the Law of Buddha and those who do not. The first protects the world, and the second is opposed to it. Where the good Dragons dwell, there are good rains and never hot sand (i.e. abundance), and the wicked Dragons are subject to punishment, and their places and followers are all burned up (i.e. deprivation). The good Serpents represented the human Nāgas who became Buddhists and the bad Serpents were those who refused to abandon their native Serpent worship.

It is agreed in both Hinduism and Buddhism that the Nāgalōka was the Nāga’s abode and it was located deep in the river water. According to Hinduism, Nāgalōka was located in the river Gaṅgā, or river Yamunā, or in the nether world. Bhōgavatī is the city of the Nāgas which is ruled by the Vāsuki as their king. According to Buddhism, Nāgas lived in the waters of river Gaṅgāor river Nairān͂janā or in the waters of Ceylon which were believed as the abode of Nāgas.

Origins of Naga Worship in Buddhism 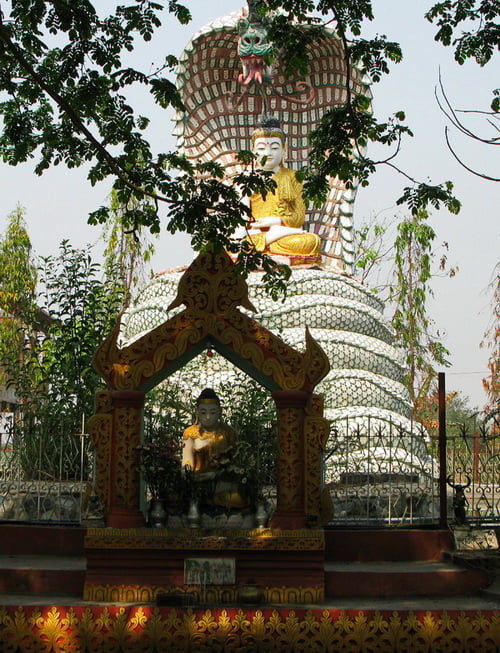