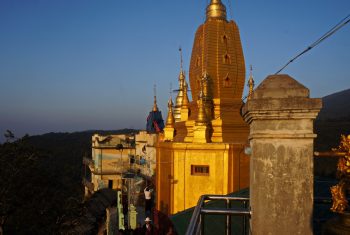 Taungkalat Monastery Mount Popa, Home to Nats and Spirits is primarily a pilgrimage sight and abode to the images of the thirty-seven Nat spirits of Burmese legend and folklore. The monastery sits on top of a rocky pointed remnant (magna plug) of an extinct volcano with sheer cliff faces falling to the plains below, with the larger Popa mountain, also referred to as Taung Ma Gyi (Mother Hill) nearby.

According to Burmese chronicles, in 442 BC there was a huge earthquake wherein a cone rose from the plains forming a solitary pointed hill approximately three thousand feet high, standing on a level plateau of eight hundred feet.

The first eruption of Popa Mountain was believed to have occurred about two hundred and fifty thousand years ago leaving a crater on the top measuring 2 kilometers wide and 609 meters deep, with one side blown away during one of its many eruptions. The plateau stands near the centre of the plain of Myingyan in the Mandalay division, 50 kilometers southeast of Bagan, and sits around one thousand feet above sea level.

According to the chronicles in ancient times Mount Popa was covered in flowering trees which led to the mountain’s naming, “Popa” a Sanskrit word meaning “flowers”. It is also referred to as “Golden Mountain” and “Great Mountain”. The vegetation around Popa Mountain is lush and green due to the fertile soil provided by volcanic ash, whilst the plains around it in the past were dry and parched, today it is green with several different crops being cultivated.

Over the centuries myth and legend associated with Mount Popa flourished. It was believed to be the home of beautiful ogresses who lived on flowers and played in the forests, magicians and alchemists who searched for medicinal herbs and roots, robbers and outlaws lurking in the forests also played a role in the evolution of Nats and spirits housed within Popa Taungkalat Monastery.

Nat and animism in Myanmar during the first millennium were widespread with most villages restricting their Nat worship to their own local Nats. Prior to the emergence and popularity of Buddhism Nat and spirit worship was the main form of worship. Although they are generally referred to as Nats, devotees of Nat and spirit worship refer to the Nats as “Lords” as most of their titles suggest.

Bagan (Pagan) approximately 50 km from Mount Popa, played a role in the myth and legend surrounding Mount Popa. According to the chronicles the great Kingdom of Pagan evolved from a cluster of around 19 villages. During the reign of King Thinlikyaung (344 – 387 AD), the people of these villages thought they were strong enough to form a city with the intention of uniting the people throughout the country to worship just one main Nat, thus binding the various tribes into a nation, the problem was which Nat? During this period there were more than 100 existing Nats.

The chronicles mention another kingdom to the north of Pagan, the kingdom of Tagaung, there lived a blacksmith who earned a reputation for being physically strong and very handsome, he was referred to as Mr. Handsome by the locals. He had the ability to wield two heavy, hammers at the same time one with the right hand and the other with the left hand. When he struck the anvil the whole village would quake and tremble.

The deeper meaning of this legend is thought in essence to preserve the memory of the various earthquakes from prehistoric times to historic times when Popa was still an active volcano.

The King of Tagaung at that time fearing the might of this blacksmith ordered his arrest, but the blacksmith having been warned disappeared into the forest. The king in his disappointment resorted to treachery, so he raised the smithy’s beautiful sister to be his queen in order to entice his queen’s brother back. He told her that since she was now his queen the smithy was now his brother and that he would make him governor of Tagaung.

On his return to Tagaung, the blacksmith was immediately seized and tied to a Saga tree on the banks of the Irrawaddy. The king together with his court and his queen when out one day came upon the scene of the blacksmith tied to a tree, on seeing this the King ordered that he be burnt alive. As the queen’s brother writhed in agony she tore herself away and jumped into the fire; the king who had grown to love his queen tried to pull her back by her long hair to no avail, only her beautiful face was saved and the rest of her body burnt.  Later she was to be worshiped as one of the Nat spirits along with her brother. The queen from then on was referred to as “Golden Face”. Both Nat spirits made their home on the Saga tree.

In their anger, the brother and sister killed all the animals and humans who sought shade and rest under the saga tree. On hearing this the King ordered the saga tree to be cut down and thrown into the river.

Images of the brother and sister were then carved into the tree trunk and covered in gold, they were then placed on golden palanquins attended by the king and carried to Mount Popa.

The images were set up on a shrine with great ceremony, and spirit mediums danced around in abandonment and joy, the king then proclaimed that the village on the slope of the hill be called Popa Ywa. Myth has it that hundreds of white horses, white oxen, and white goats were sacrificed to the brother and sister and a title was bestowed upon them as “Lords of the Great Mountain”.

The King also ordered that the month be renamed Nat-Taw” or the month of the “Royal Nats”, and fixed the full moon day in this month as the annual festival in honour of the Popa Nats. The name of the eighth month of the Burmese year, Tazaung-mon, means the month of the “Festival of Lights”. Before the renaming of this month to Nat-Taw the Festival had previously been held one month earlier.

Future kings on the throne of Pagan continued the royal patronage of the Maga-Giri spirits and it was established as a national cult.  When the city of Pagan was built in 849AD, the figures of the brother and sister were carved on the pillars of the main entrance to symbolize that they were the guardian Nats of the city and people.

When King Anarawrahta came to the throne he was a little suspicious of the Popa region and thought it was possibly a centre harbouring those who would plot against him. Although there are bountiful legends and myths associated with the lead-up to King Anawrahta’s decision to allow the continued worship of 36 of the more than a hundred Nats. His main objective was to sway his people towards Buddhism and suppress Nat and spirit worship. In order to do this he made an exception for one more Nat, the thirty-seventh, which he named Thagyamin (Sakra in Pali), this Nat was to be the king of the Buddhist gods and the guardian god of Buddhism. Thagyamin was made head of the pantheon thus replacing Min Maha-Giri Nat.

Burmese Nats are made up of beings mentioned in Burmese legend and folklore, a few were worshiped in Prome as Pyu gods and goddesses, such as  “Lady Golden Sides”, “Lady Three Times Beautiful”, the “Little Lady with the Flute, “Brown Lord of Due South”, and “White Lord of the North,” and who were later worshiped at Pagan. Each of these Nats have their own unique story.

Thirty-five of the Nats died tragically in strange ways. From time to time over the centuries, some of the original 36 Nats have been displaced and others fitting the criteria have taken their place. The main Nat Thagyamin (Deva) introduced by King Anawrahta in the 9th century remains constant.

The official list of Nats over the centuries from time to time has been dictated by royal authority. Due to the fall of the Burmese Kingdom in 1885 under King Bodawpaya an official and final list was drawn up by minister Myawaddi Mingyi U Sa, a renowned Konbaung period poet, playwright, composer of music, and statesman. He served under four kings in a variety of roles and longtime secretary to King Bagyidaw, grandson of King Bodawpaya.

There are many books on the subject of Nats and spirit worship in Burma, each differing in their opinions of which there are many. The main source of this information was gleaned from the book “Folk Elements in Burmese Buddhism”, written in the 1950s by the Burmese scholar Maung Htin Aung (1909-1978), author of several Books on Burmese culture. 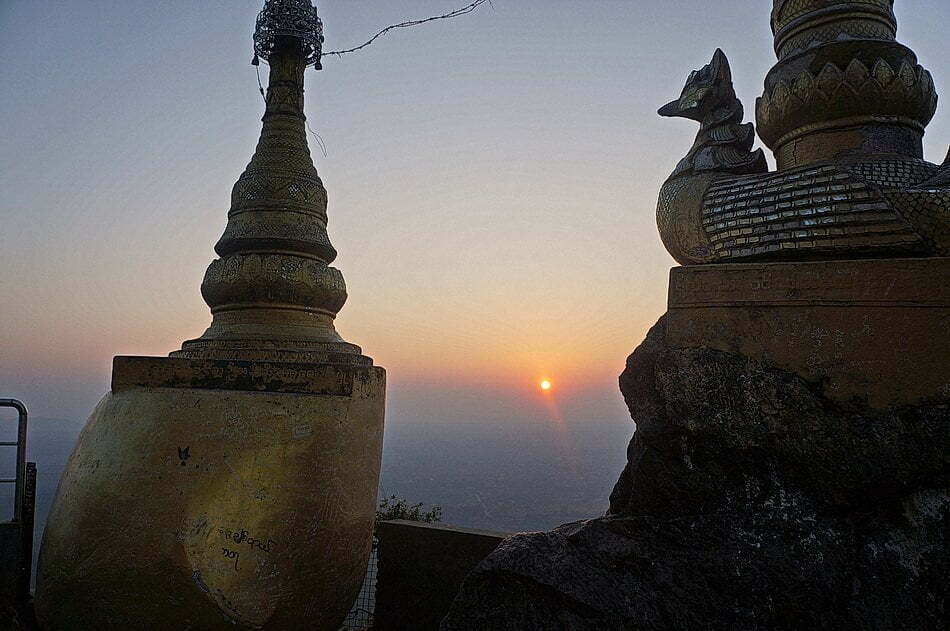