A rare Burmese Bronze Pagan Buddha Statue with hand gestures in bhumisparsa is seated on a pedestal with images of Mara’s Daughters in relief depicted across the front of the base. This Pagan Buddha statue judging by the marks on the side suggests that it once had a reredos in which it slotted into.

In Buddhists texts describing Mara’s relationship with the Buddha, Mara’s main objective was to divert and distract Siddhartha, to prevent him from attaining enlightenment.
Read More

In Buddhism, it is acknowledged that Mara is both a literal and psychological interpretation of one’s own thoughts and can be interpreted as either an internal voice that is manifested in one’s own mind or giving in to the temptations emerging from our own deluded impulses. Mara has been mythologized as that a battle between good and evil.

There are variations in the story related to Mara and his daughters as to whether they appeared to the Buddha before or after enlightenment. Mara is believed to be the earliest non-human being to appear in Buddhist scriptures, he is also referred to as “Lord of the Senses” or “Lord of Death”.

The most popular version of the story is when Siddhartha was on the verge of attaining full enlightenment, Mara tried to distract him with visions of his three beautiful and seductive daughters, Tanha (craving), Arata (aversion), and Raga (passion) dancing provocatively in front of the Buddha in order to seduce him from his path to enlightenment.

Mara then began to mock him, telling him that his attempts to attain enlightenment were all in vain since there was no one to witness his achievement. In response, Siddhartha reached down with his right hand and touched the ground, proclaiming that the earth itself would be his witness. The earth trembled in response, whereupon Mara flew off in a rage, knowing that all that he had done to subvert Siddhartha from reaching enlightenment had failed.

The Three Daughters of Mara

Although the most popular story related to the enlightenment of the Buddha mentions Mara’s three daughters, In some Buddhist texts mention five daughters which include two lesser-known daughters named “Pride” and “Fear”. Possibly the scene across the base of the Pedestal in which the Buddha is seated shows the three half-naked dancing women in the centre as the daughters of Mara, Tanha, Raga, and Arati with a seated figure on each side of Mara’s daughters being the lesser known daughters “Pride” and “Fear”, each with their hair in their hands described by Charles Duroiselle, a French-born Burmese historian and archaeologist and co-founder of the Burma Research Society in 1910 as well as a scholar in the Pali language.

Those who see Mara as a personification of our human ego interpret the stories associated with him in a symbolic way. Mara becomes a representation for internal voices. His attack on the Buddha represents internal impulses towards violence and rage that can be overcome by following the Buddha’s teachings of cultivating compassion, detachment, and gentleness.

Mara’s daughters are depicted in Burmese wall murals and Buddhist Iconography depicting scenes of the Buddha at the time leading up to and after his enlightenment. 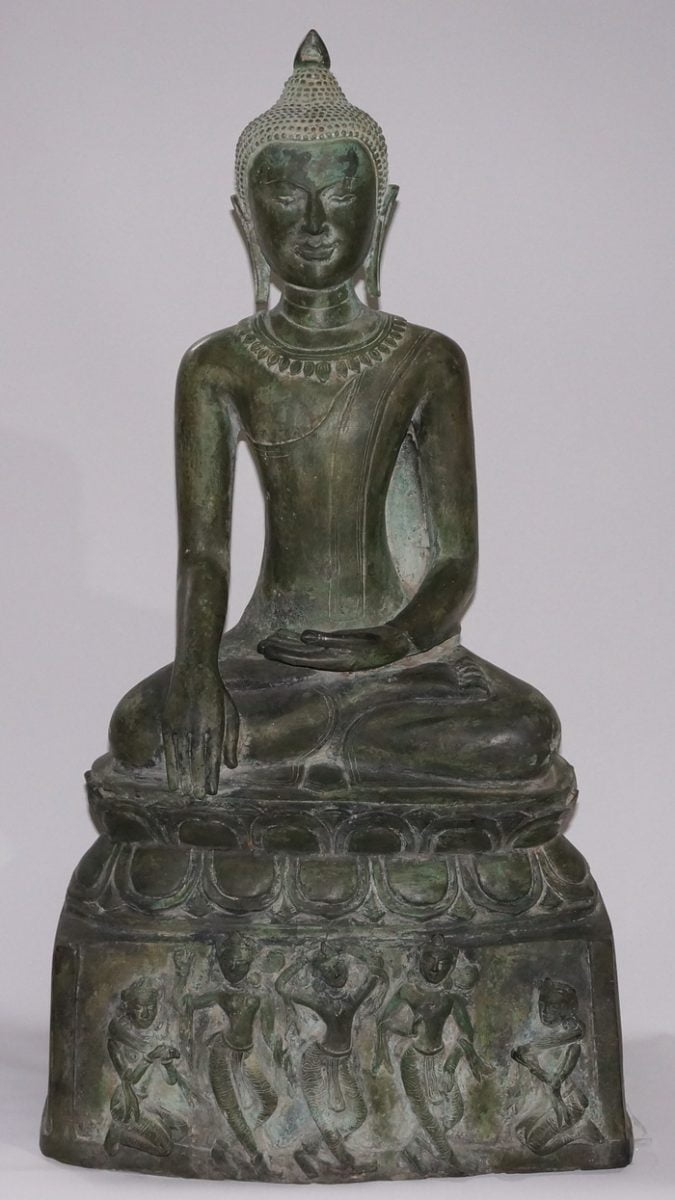