The Maitreya Buddha in this stele is seated with both legs pendant with feet resting on a double lotus pedestal. This posture is also referred to as European fashion and a single halo frames the head. The Maitreya is flanked on either side by what would appear to be figures of lions. Lions are depicted in Burmese Buddhist iconography and art dating to the Pagan Dynasty and are a feature on the Burmese lion throne used by Burmese monarchs.
Read More

The face and style of this statue portraying the Maitreya is perplexing, it is not a traditional Burmese style and is possibly more in keeping with the Mahayana Buddhist tradition which existed during Burma’s early Buddhist period which would lead us to believe that it is several hundreds of years old.

Both red and black lacquer has been used in Burma since ancient times as a base or primer for gilding for better adherence, this stone carving shows evidence of this, the existing gilt is gold leaf. The lacquer has been damaged in places revealing the light colour of the sandstone underneath.

The carving on the inner edge of the halo is incomplete as it extends upwards towards the top, indicating that the top section of the halo was more rounded, now worn due to exposure to the elements, or damaged at some point. The dress style is one that is seen in some Himalayan style Buddha statues with the body fully robed and rounded neckline. The fingers on both hands are shorter than those found in Burmese Statues.

The Maitreya Buddha is also referred to as a future Buddha or a Buddha in the making and is frequently seen in a seated posture with both legs pendant, and both feet resting on a pedestal. The Maitreya Buddha has also seen in Indian, Himalayan, and Chinese art with one leg pendant and the other with the knee bent and the foot resting on the thigh or pedestal on which the statue is seated. The Maitreya is neither male nor female. 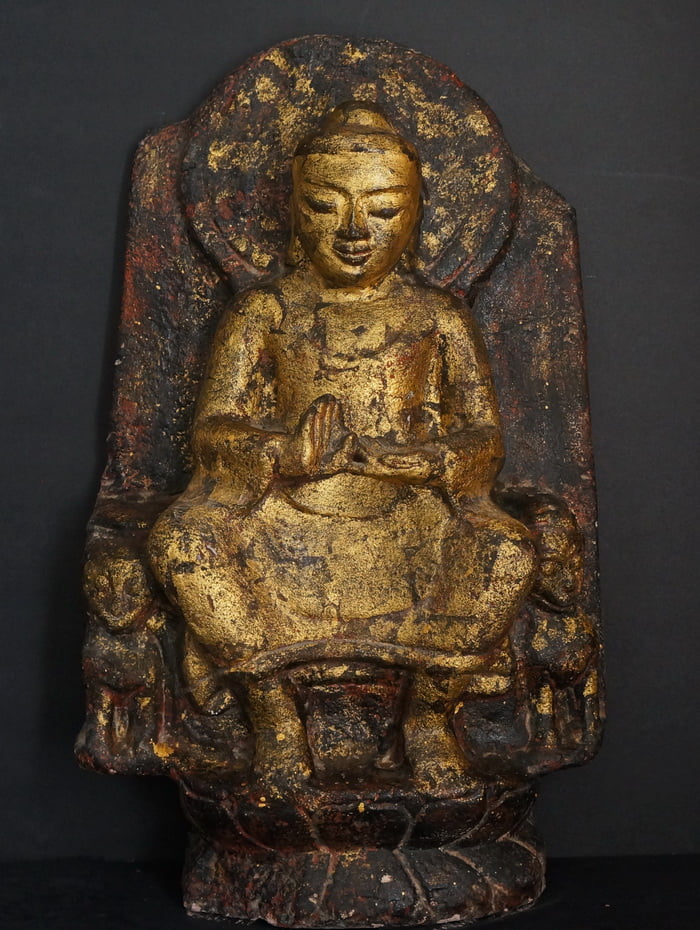