The building of Mingun Pahtodawgyi Pagoda Myanmar – was ordered by King Bodawpaya, the sixth King of the Konbaung dynasty. Construction of Pahtodawgyi Pagoda started in 1790 and was left unfinished upon his death at the age of 81 years in 1819.

If the Pahtodawgyi Pagoda had been completed it would have made claim to be the worlds largest pagoda standing at 152 metres high. Today, one can see the magnificence of what it might have been had it been finished. What stands today is only the bottom third and measures around 70 metres wide and 50 metres high.

Mingun is situated on the banks of the famous Ayeyarwaddy (irrawaddy) River, approximately 10km kilometers north-west of Mandalay in central Myanmar.

The famous Mingun bell, commissioned by King Bodawpaya was to reside at the top of the Pagoda on completion of the building. Today it resides under cover near the banks of the Irrawaddy. Weighing 90 tons, it was the largest working bell in the world up until the Russians cast a larger bell, although theirs is cracked. It is rumored that on completion of the bell King Bodawpaya had the craftsmen killed so that they couldn’t make another.

The character of King Bodawpaya is reflected in the grand design of this huge monolith, he wanted the biggest and the best. He was a strict Buddhist and believed that he was the Buddha Mettaya (Maitreya) “a future Buddha” or “one yet to come”. He was referred to as The great King of the Dharma. He believed his destiny was to become a Buddha. There was much consternation and alienation among the monks regarding the Kings proclamations.

Time has also not been kind to the Mingun Pahtodawgyi Pagoda monument, it was severely damaged by an earthquake in 1839 and further damage in the 2012 earthquake making it unsafe to enter and has been closed to visitors since. 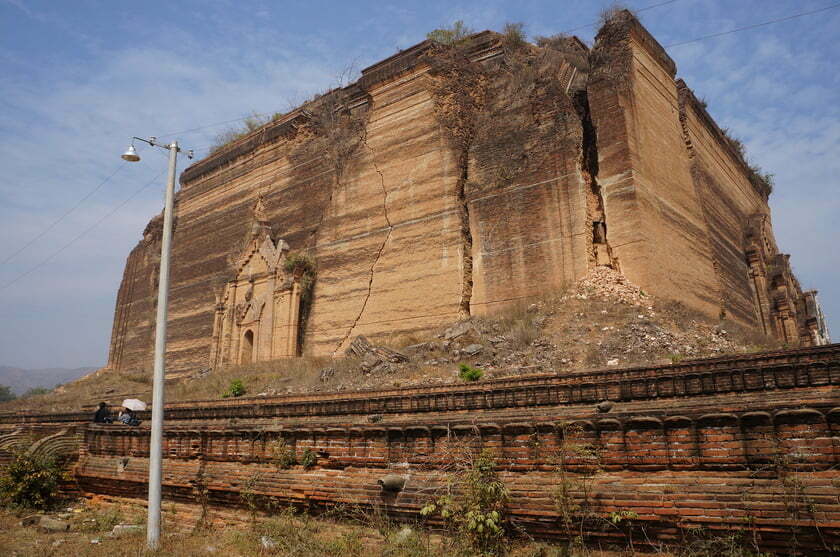