Konbaung Mandalay Palace Burma is situated a short distance from the foot of Mandalay Hill. Mandalay was previously referred to as Yadanabon or Yadanarbon “City of the Mount of Gems“, it was the last of the royal capitals founded by King Mindon in 1857. Prior to this, Amarapura was the former main capital of Myanmar (Burma), 11 km south of Mandalay. Today it is part of Mandalay and is now called Taungmyo (southern City).

King Mindon unhappy with the events in Amarapura and the loss of lower Burma to the British during the Ango-Burmese wars in 1824 and 1852 gave rise to moving the capital from Amarapura to Mandalay.

Land chosen for the capital at the foot of Mandalay hill was chosen by a group of men selected for their auspicious day of birth. Brahmans, monks and learned men were consulted on all levels. The timber used to build the palace was found on land that was considered to be pure. Cemeteries and land with decaying matter or were considered foul or smelly were avoided. Each tree trunks was inspected for imperfections and were to be free of knots, cracks or blemishes and had to be perfectly straight.

Whilst all this planning for the future palace, an area was set aside on the allotted land to house King Mindon on his regular visits in order to inspect the progress of the Palace. Construction lasted from 1857 to 1861. Canals were built to bring water to the city and 20 parks to retain some coolness. 360 teak pillars were used were to symbolize the 360 days of the lunar calendar. In 1878 King Thibaw succeeded his father

King Thibaw (son of King Mindon), his wife Queen Suphayalat, with his immediate family and entourage were exiled to India by the British in 1885. Mandalay palace was then used by the British Army, the Lions Throne room became the garrison church, King Thibaw’s monastery was converted into a Protestant chapel. Monks were expelled from many of the larger monasteries and the monasteries were then commandeered by the British military.

Very little remains of the original palace today, Most of its treasures were stolen and the building fell into a state of disrepair. A shameful episode in the history of British colonialism.

Much of the palace was destroyed in World War II by the allied forces and rebuilt in the 1990’s by the Junta and is not an exact replica of the original palace. 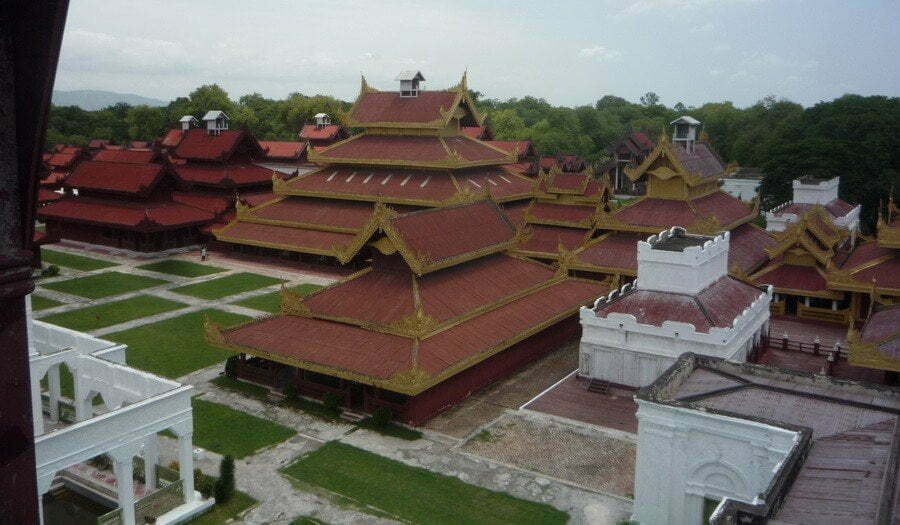