The Jambhupati Style Royal King Buddha Statues are usually seen wearing a tight fitting coat, trousers and crown, as opposed to the more common image of a Buddha statue wearing loosely fitted robes similar to those of a monk, the hair curls are usually represented with small knobs made from thayo lacquer or carved into the statue. The Jambhupati style is more often seen seated in the crossed legged lotus position on a simple throne, or sometimes on a highly decorative or tiered throne.

The legend of the Jambhupati style Buddha dressed in royal attire, wearing a crown is thought to have originated during the lifetime of the Buddha, and is related to his meeting with the heretic, haughty and conceited king Jambhupati, renowned for terrorizing his kingdom and for his cruel ways. The Buddha endeavored to convert the King by asking him to forsake his evil ways, and to instead practice kindness, but King Jambhupati was unmoved by this request.

Realizing the king’s total reluctance to change his ways, the Buddha magically appeared in resplendent royal attire that so humbled King Jambhupati, he accepted the Buddhist precepts, he then accepted the dharma and becomes a monk. 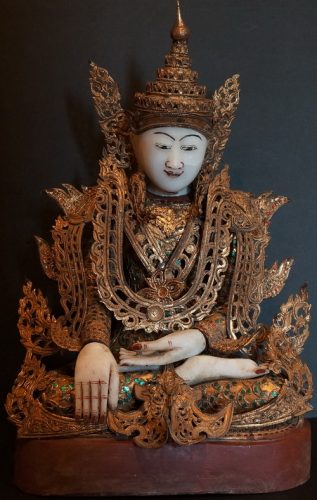 During Mandalay period the Jambhupati King Buddha statues were mostly made from wood, and highly decorative, embellished with glass mosaics, glass beads and decorated lavishly with thayo lacquer. The thayo lacquer is applied to the sculpture in varying in patterns, some resembling fish scales, others with floral scrolls, usually the body is gilded.

Some statues, especially the Mandalay Jambhupati alabaster and wood combined statues are adorned with separate metal regalia such as large side flanges, crowns taking the shape of a stupa and body regalia made from zinc metal plate. A central medallion is often displayed on the centre back and front of the body or as a centre piece on the metal regalia.

The king Buddha or Mrauk-u style found in Arakan, in the Rakhine State developed much earlier through the influence introduced by their northern Indian neighbors several hundred years earlier.

The crowned Jambhupati style from Arakan in Rakhine state, Myanmar are mostly found in bronze, with ornate side flanges attached to the crown, large decorative finials surrounded by a pronged crown, similar to those seen on English kings. The Mrauk-U Jambhupati style Buddha statue is usually seen with jewels decorating the neck and arms, wearing large earrings with the lapel often seen draped around both arms. They are most often seen sitting in the lotus position with hand gesture in bhumisparsa mudra (touching earth, the moment when the Buddha became enlightenment). They are sometimes cast with depictions of animals in the form of an elephants or lions, both important animals that played a role in the life story of the Buddha as well as disciples and other figures relevant in his life story.

The Shan Jambphuti Buddha statues are seen in alabaster, marble, wood and bronze, the wooden statues like the Mandalay style are highly decorative, decorated with glass mosaics, beads, thayo lacquer decoration and gilded in a similar manner as to those seen in Thailand. They usually have large pronged crowns with large side flanges attached to the crown, whereas the bronze statues are similar to the crowned statues from Rakhine, some plain and some cast with motifs in relief with disciples in the round kneeling or standing at the feet of the Buddha. The alabaster and marble statues show the decoration of a king Buddha incised or carved into the stone. 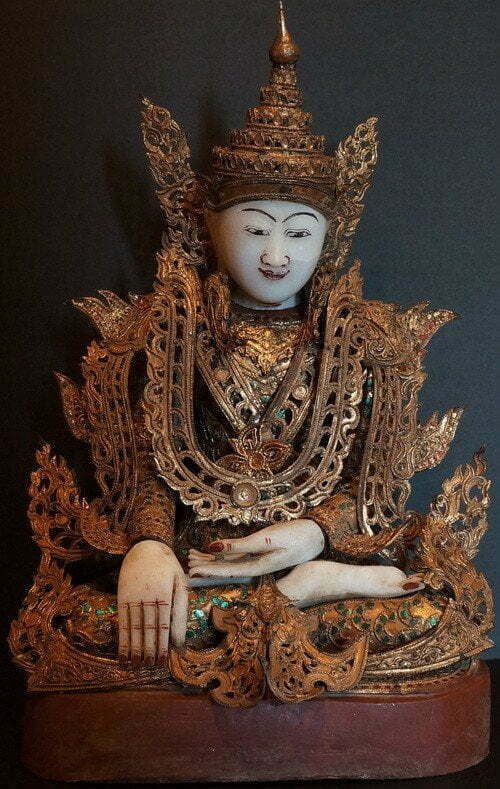