Interpretation Burmese Andagu Stone Stele depicting the eight great events in the life of the Buddha with intricately carved scenes in minute detail dating to the Pagan Dynasty 11th-12th century are an amazing testimony to the master craftsmanship of the Pagan period.

Creating these intricate scenes so perfectly by hand must has involved a lot of time, labour, and love and devotion to the Buddha. We never cease to wonder about the person who must have spent many months carving and chiseling these intricate figures into the stone in such detail.

The central figure of the Buddha image in this stele is seen here with a large, pronounced nose, thick lips, mouth slightly upturned at the corners, eyebrows meeting in the centre with eyes gazing downwards with large, elongated ears touching the shoulders.

The facial expression and features of the Burmese Pagan Buddha statue vary, unlike those of the Gupta and some Indian Buddha styles where the facial features followed a more idealistic human-like appearance.

Burmese Buddha statues and images are often seen with large earlobes, some touching the shoulders and others extending to above the shoulders, depending on the era in which it was made, the ears are sometimes seen hugging the side of the head or standing out like those made during the Ava period, but all with long earlobes.

Burmese craftsmen from the Pyu period (2nd – 11th century) developed their own unique styles in Buddhist iconography, incorporating features inherited from their historical relationship to ancient Hindu and Indian influences, and is reflected in Burmese paintings, carvings, and Buddha statues from the past to the present.

Buddhism, according to some scholars was introduced into Myanmar through trade with India by Buddhist pilgrims and monks around the 1st or 2nd century, other scholars believe around the 3rd to 5th century. Prior to the introduction of Buddhism into Myanmar, tantric and animistic spirit cults were the main form of belief systems and worship.

During the mid-9th century, the first ruling king was King Anawrahta of Pagan, he embraced Buddhism and declared Buddhism as the main form of worship. Realizing the difficulty in changing the belief system among his people, and their animistic beliefs, he allowed 37 of the most popular Nat spirits to coexist alongside Buddhism.

THE EIGHT MAIN EVENTS IN THE LIFE OF THE BUDDHA

The Interpretation of Burmese Buddhist Andagu Stone Stele was defined by Pala artists in India. However, Burmese craftsmen during Pagan times developed their own unique style in their presentation of the eight main events in the life of the Buddha, also following the Buddhist scriptures.

Some andagu stone stele show between just one event or up to sixteen, there are many other scenes, around eighty in total (Jataka’s), which fall outside of the eight traditional scenes leading up to the Buddha’s enlightenment and are depicted in wooden carvings, wall paintings and wall panels in Pagan and many Pagodas throughout Myanmar.

The eight scenes on this stele are relevant to the most important events in the life of the Buddha and the eight sacred sites where the events took place. Some stele also includes the seven stations after the enlightenment of the Buddha.

The scenes traditionally are shown in clockwise order from the nativity scene, usually at the bottom, and culminating in the Pari-nirvana scene at the top, where the Buddha is lying down with his attendants/devotees kneeling beside him. Some andagu stone steles or tablets may only show a couple of scenes, whilst others show the figure of the enlightened Buddha in the earth-touching posture.

THE CENTRAL SCENE ON ALL ANDAGU STONE STELE:

The dominant feature in most andagu stone steles is the central figure of the Buddha seated under the Bodhi tree at the moment of enlightenment, with the fingers of his right hand touching the earth, crying victory over the demon Mara, other andagu stone steles may show him standing.

Two rows of Mythological creatures decorate the base on which the running Nagas are kneeling with devotees, lions, elephants, horse, and other creatures that were significant in the life stories of the Buddha. 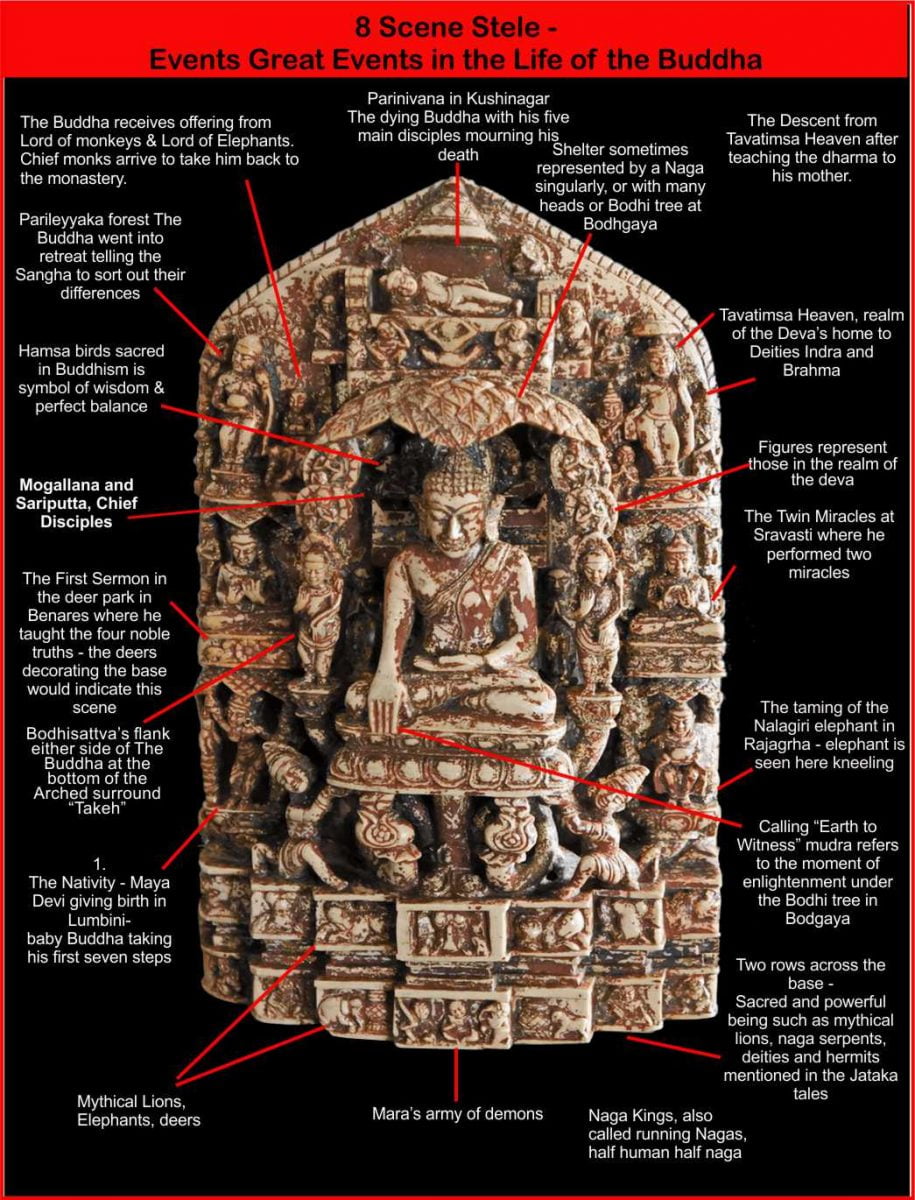