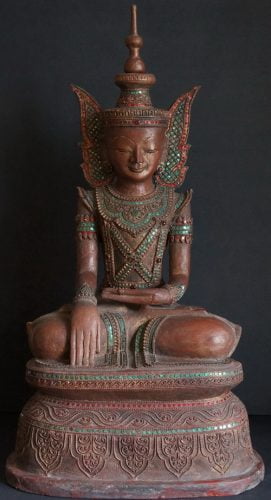 From the Colonial period to present times the main reason for the decline of the lacquer ware industry was due to imported foreign commodities which were considered more desirable and durable, combined with the scarcity of raw materials along with less demand from the local market, combined with the enormous amount of time and labor required to make lacquer ware.

THE ORIGIN OF LACQUER WARE

The art of lacquer, known as pan yun in Myanmar, is one of the ten flowery arts, “Pansemyo” in Myanmar language. There are some major differences of opinion amongst scholars as to exactly when the lacquer tradition originated in Myanmar.

One opinion considers that Myanmar’s lacquer ware tradition was originally derived from China due to the interactions between the two countries for about 7,000 years.

The second theory states that the lacquer tradition was established in Upper Myanmar during the reign of Anawrahta (1044-1077AD) after he conquered Thaton in 1058 A.D, he brought back artisans and craftsmen skilled in the art of lacquer ware with him to Bagan. The theory further states that the lacquer tradition of the Mon kingdom, which was introduced to Bagan, was not even native to Thaton, but was acquired through its overland trade with the neighboring kingdom of Chiangmai.

The third theory posits that the lacquer tradition began in Myanmar only in the 16th century and was attributed to King Bayinnaung (1551-1581 A.D) taking back artists and artisans from Lanchang (Laos), Chiangmai and Ayuthia to his capital of Hanthawaddy, after his conquest of these kingdoms.

The art of lacquer ware constitutes among the ten traditional arts and crafts. The word “yun” in Myanmar has two meanings, one indicates the name of an ethnic group, speaking a Shan dialect used in the easternmost part of the Shan State; the other denotes the lacquer ware, delineate on lacquer ware and etch coloured designs on lacquer ware.

Production In Myanmar of utensils made of bamboo wickerwork and wood with resin were called lacquer ware. Dry lacquer Buddha images called man phaya are made in a group of villages about eight miles west of Ye-u, notably at Me-o, Sithemye, Malwe and Leindaw.

The craftsmen were cultivators who made lacquer ware Buddha images in their spare time. The method was to make a rough image of well kneaded mud, moulding with the hand where possible, and finishing off the more intricate parts with a wooden, or iron implement (than-lyet). Before the mud is dry, the image is daubed over with a wash of straw ash and water.

Over this core is laid a plaster of thit-si mixed with finely sifted teak sawdust, the eyes, nose, and delicate parts being moulded with an iron, or wooden implement. The mud core is then removed, the plaster being cut open to extract the mud from the head, arms, and other difficult parts. The openings are next closed again with the thit-si and saw dust plaster, then the image is coated with a lacquer of clear strained thit-si mixed with the ash of straw or bran.

The outer coat is smoothed with an iron instrument smeared with sesamum oil and left to dry. When the lacquer is set, the image is washed, polished with Stone, and varnished with the purest strained thit-si.

The images, left in this condition till a purchaser appears, then they are gilded, if desired. One man can turn out altogether about 30 to 35 images in a season. The work cannot be done in the hot weather as the mud gets too dry, and the lacquer does not set properly; and it cannot be done in the rain for, though the lacquer will set, the mud remains moist and sticks to it.

Almost all lacquer ware Buddha statues find their way to the Shan States, where they are sold on the open market or to other areas of Myanmar, even in places as remote as Kyaington. Most of those sold in the Shan State are almost a cubit high.

The making of lacquer ware

The substance used to make lacquer in Myanmar is called thit-si, which is the sap of the lacquer tree (Melanorrhoeausitata), and it grows wild up to elevations of nearly 1000 meters in the drier forests of the Shan State, the Kathe and the Bhamo District. Thitsi turns black on exposure. It is tapped by making V shape incisions in the bark of the trees. The liquid is then gathered in a small bamboo cup inserted at the base of the cup. Basic materials used in the production of lacquer ware are bamboo and wood. Myanmar lacquer ware objects are durable and resistant to heat.

The materials used in the production of lacquer ware include bamboo or wood, resin, vermilion, yellow orpiment, Indigo and gold leaf. In most cases the lacquer ware process begins with the making of an object in either bamboo or wood. Soft woods such as baing (Tretramelesnudiflora), di-du` (Bamboo insigne) and let-pan (Bambaxmalabaricum) are used to fashion everyday rectangular objects such as boxes, folding tables and screens.

When greater weight and durability are required for articles such as monastic furniture and architectural fixtures, teak wood is used. Many gilded and inlaid objects are made from wood. The best quality lacquer ware is usually made from a base of bamboo. Tin wa (CephalostachiumPergacile) or myin-wa (Dendrocalamus Strictus) from the central Sagaing Division are considered best because of their ten feet trunks and widely spaced joints.

After drying, the bamboo trunk is cut just below the joints with a machete. These cylindrical pieces are split with a sharp knife into long thin strips. They may be flat or round depending on the type of receptacle to be made. To get a base object of bamboo, it must undergo various processes:

After long trim strips of bamboo are obtained, four kinds of base object are used namely:

For colouring, other than black (the natural colour of lacquer) a variety of pigments are used. The characteristic red colour of Burmese lacquer called hintha-ba-da comes from finely ground cinnabar (mercuric sulphide), which is imported from China.

Before being applied to a lacquer ware surface, it is mixed with a little thit-si and worked to a smooth consistency with a portion of tung oil (Shan-si) which comes from a tree in the Shan States.

On inferior wares, red ochre is sometimes used as a colourant. Since it does not bind well with lacquer, it tends to flake. The resulting colour is rather dull and lacks the high gloss of the hin- tha-ba-da pigment. In recent years brown had become more common among Myanmar lacquer wares. It is made by adding a higher proportion of thit-si to the hin- tha-ba-da pigment. Red and brown are commonly used to finish the inside of Myanmar lacquer ware. Yellow or hsei-dan is found in the Shan State. It is pounded and washed several times until a fine, impalpable powder remains. This is mixed with a pellucid gum such as dammar.

When ready for use, it is seasoned with a small amount of thit-si and Shan-si to attain a suitable consistency. To make orange, orpiment is added to hin- tha-ba-da. A blue colour (me`-ne) is made from finely ground indigo. Indigo comes mainly from West Germany and India. Blue pigment is rarely used in lacquer work because it tends to form a rather dull, uninteresting colour when combined with thit-si. It is usually added to orpiment to produce a green colour.

Shwekuncha Pagoda inscription 1, dated in 1223, described that in gilding Buddha images, vermilion, yellow orpiment, and lacquer were used. Evidence indicate that lacquer was used to make utensils last longer and in the gilding of images during the Bagan Period. Lacquer is the principal material in lacquer ware industry.

Depending on various techniques in decorating lacquer ware, it is divided into six types made during the Konbaung Period. They were

The Connection between Lacquer ware and Buddhism

Lacquer ware craftsmen in ancient times were influenced by the concept of the Buddhist religion. The large hsun-ok are used when making ceremonial offerings to monks; the ordinary trays by women, for carrying fruit and vegetables to market; and the bowls and small boxes for miscellaneous purposes. The pumpkin lacquer ware boxes became very popular from 1900 to the 1950s. Maungdaung turns out the shallow stands on which the dishes are arranged at mealtime and daunglans. Maungtaung produced a great many of lacquer wares, of which Maungtaung khwet or Maungtaung cup is well known throughout the country. The use of Maungtaung khwet is connected with a very important Buddhist procession called shin pyu (novitation) ceremony.

Daung-lan is made of wood or bamboo with thit-si painting. It is a circular shape plate with 4 legs. It is roughly 3 feet in diameter and 6 inches to 12 inches in height, it was used for family meals during the Konbaung Period. The trays are usually made of bamboo weaving and coated with black thit-si. Daunglans were known to be used during the Bagan period.

The betel box could be differentiated into two types, a multi-cup betel box and little betel box. The multi-cup betel boxes were used for ceremonial purposes and the lids and outer surface of the main frame were decorated with incised lacquer design. In the upper tray about half-fist sized silver cups were placed with chipped betel nut, cutch resin, tobacco, lime paste and spices such as clove aniseed etc., inside them. This multi-cup betel box was used in important celebrations such as royal ceremonies, and wedding ceremonies, and popular during the Konboung Period at coronation ceremonies or wedding ceremonies of a prince or princess. Yunbaung parabaiks were used to record the ceremonial events of the royal families, written on folded writing sheets.