Historical Rakhines Capital Sittwe is geographically positioned on an estuary with the Kaladan, Laymro and Mayu rivers emptying into the Bay of Bengal. The advantage of both sea and land routes to India played a large part in its early cultural and political success and development in the Southeast Asia region.

After the first Anglo Burmese war, when the British Raj annexed Rakhine in 1785, the British headquarters in Mrauk-U was transferred to Sittwe. Mrauk-U unfortunately turned into a political backwater and has never recovered its former status or grandeur.

Rakhine State occupies a long, narrow strip of land along the eastern coast of the Bay of Bengal, and the western part of Myanmar. It is also known by its ancient name Arakan, abundant with Temples, Pagodas and ancient Historical sites. Rakhine is one of the seven states constituted in the Union of Myanmar, separated from Myanmar proper by the Yoma ranges and Bangladesh by the river Naaf. The people of Rakhine are made up of many minority ethnic groups and hill tribes.

Rakhine’s glorious historical past is linked to the fabulous and amazing township of Mrauk-U, a forty mile boat trip upstream North of Sittwe.  Mrauk-U is historically acknowledged for its rich history going back more than two thousand years and its many archaeological sites, old pagodas and monasteries scattered across the landscape.

Whether the brown stone pagodas and bell shaped stupas gradually materialize from the mist as
you boat up the murky Kaladan River, or pop up suddenly like unexpected treasure in a jungle clearing, after one bounces wearily along the new road from Sittwe in northwestern Burma. Either way, dozens of breathtaking relics pack a lush riverside valley, with more monuments dotting hillsides in every direction, marking this as one of Southeast Asia’s great ancient kingdoms.

Daw Khin Than, a curator, and wife of the former head of the local government archeology department, says contractors with no supervision simply slapped concrete on temples, altering architectural integrity. “There has been so much damage by people with no knowledge,” she says. “There are so many things in Mrauk-U to show the world: not just the temples, but ancient city walls, and moats. We could dig it up, if they let us.” The ethnic issue unquestionably stymies progress. “The government doesn’t support us.” The story of unified Burma, and a grand civilization centered around ancient cities like Bagan, is challenged by a different kingdom that actually outlasted Bagan.

The Arakanese not only built grand Buddhist temples, but also forged a prosperous multi-ethnic society that included Indian Muslims and Christian traders.

Apart from being the gateway to Mrauk-U, there is little remaining of Sittwe’s historical past except for a beautiful old clock tower built by the Dutch in the 18th century on a steel structure, a few old decaying buildings, one of which is a mosque which would have been beautiful in the distant past and a fairly modern museum, built to house archaeological finds, and is home to many bronze Buddha images, bronze bells, coins and miniature bronze cetis dating from the 5th to 10th century bearing witness to a once thriving bronze casting industry in Arakan during this period where some of the most beautiful Jambhupati style (royal King) Buddha statues were made.

Symbolism, history and meaning of the Arakanese flag

The blue emblem was added later on, and is called the thiriwissa, this symbol has a lot of symbolism within it. To start off, there’s the sein dow, which represents the strong and just will and laws of the Arakanese. Directly translated, it means “diamond mountain”. Below it, is a line or curve which represents a strong and sturdy base for these laws as well as the people of Arakan. Surrounding this are two curves that represent the conch shells that are found along the Arakanese shore along the Bay of Bengal.

Conch shells are both historically and culturally significant because the conch shells were used in ancient times as part of coronation and rituals for the Arakanese kings. Surrounding all of this are the kroo flowers, the Kroo flowers represent the kroo, which is a creature that lives a very peaceful and calm lifestyle. Above that are the sun and the moon. The sun and moon can be related to light and dark, or things that are essential for life. This is very important to the Arakanese people and in even in ancient times, two dynasties of kings used these as symbols, and they became even more significant to the people.

Below this are seven dots which represent the seven stars that align in a certain formation that in ancient times was used to signify when the crops were meant to be harvested. Obviously, this was very significant for them at that point. Now, they have become even more symbolic because of the seven ethnic groups that live in Arakan. The seven stars are becoming more symbolic of these seven ethnic groups. 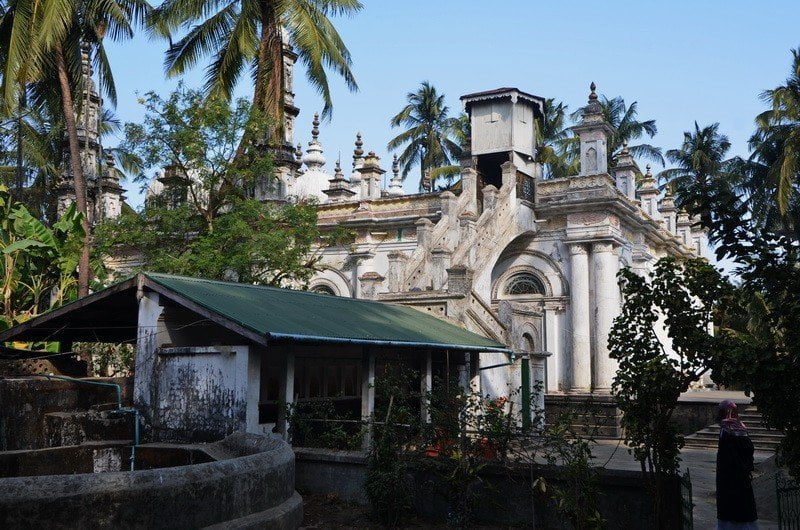