The Hagiography of Maha Thera Shin Arahan of Thaton, born to the wife of a Mon Brahmin priest during the Kawza Sakarit year 394 (1032 AD), his year of birth in other references is given as 1034 AD. Before becoming known as Shin Arahan his original name was Shin Dhammadas, it was only after he came to Pagan that he was renamed Shin Arahan. Before becoming a monk he had already learned the Buddhist doctrine and learned all four Vedas prior to his initiation.

Under the guidance of his mentor Ashin Silabuddhi in Thaton he learned the Tipitaka and Pali Athakarta (commentaries on the Pali Buddhist canon that provide information on the culture, people, and religious history of ancient India and Sri Lanka He also mastered Pali, Pyu, and Mon literature).

Buddhism in Thaton, (Thaton was also referred to as Sudhammavati) during that time was under increased threat from the influence of Hinduism. When Shin Arahan was in his late teens (19 years), he left Thaton and fled north to meditate in a solitary hermitage in a forest near the capital of Bagan, whilst there he practiced the art of meditation. After attaining Arahathood (Sainthood), he became known as Shin Arahan.

One day a hunter met Shin Arahan and observed that the young monk was of pure heart, he at once venerated him and took him to meet with King Anawrahta. During this period Bagan was known as Arimaddanapura (the city of the enemy tramplers). A debased form of Buddhism was practiced in Bagan which was a mix of Mahayana Buddhism, animism, Nat spirit, and Naga worship, as well as the worship of deities such as Vishnu, Siva, Brahma, and Paramiswa practiced by the King Anawrahta and Ari Priest sect.

The King, on meeting with Shin Arahan was impressed by him thinking that if the monk was indeed a person of pure thoughts and noble origin he will take a noble seat, if he is of a low origin, he will take a lower seat, the king then invited the monks to be seated, Whereupon Shin Arahan seated himself upon the throne, King Anawrahta then asked of him “Master of what race art thou and where did though come from and whose doctrine dost though follow?”

Anawrahta was so enraptured by the young monks’ teachings that he entreated him saying, “Most Venerable, pray, teach me, even though it may be a little of the laws preached by the Lord, the Master.”

“Anawrahta told Shin Arahan that he would follow the doctrine of the Lord Buddha and that he would be the royal patron and supporter of Theravada Buddhism. “Most Venerable” Anawratha continued to question, “Art thou not accompanied by anyone? Shin Arahan replied, “Noble King, there are four Maha Thera who came with me”. Happily, Anawrahta said, “Most Venerable five Maha Theras, pray come to my Palace for alms and to pray to tell me of your needs.”

The monastery has since been renovated and still stands today and the Dhammasala has been reconstructed to its original design and is known as Shin Arahan Oak Kyaung.

Maha Thera Shin Arahan told Anawrahta that without the Tipitaka and the Buddha’s sacred relics, Theravada Buddhism could neither flourish nor last for long. He, therefore, advised Anawrahta to send his envoys with presents to the King of Thaton to ask for the Tipitaka. Anawrahta did so accordingly, but the King of Thaton refused his request. Whereupon in the Sakarit year of 419 (A.D. 1057) Anawrahta marched on Thaton. After the fall of Thaton, thirty sets of Tipitaka, the Buddha’s relics, and other religious objects were carried on the back of thirty-two white elephants to Bagan. One thousand learned monks from Thaton were also taken back to Bagan.

According to the chronicles, the Pagan Kingdom followed the prevailing Saka Pyu Era, but in 640 CE King Popa Sawrahan (613–640) recalibrated the calendar, naming the new era Kawza Thekkarit with a Year Zero starting date of 22 March 638 CE.[4] It was used as the civil calendar, while the Buddhist Era remained in use as the religious calendar. (source Wikipedia)

The book “The Glass Palace Chronicle” gives a more detailed and colourful description of Shin Arahan and his role in the evolution of Theravada Buddhism in Myanmar. 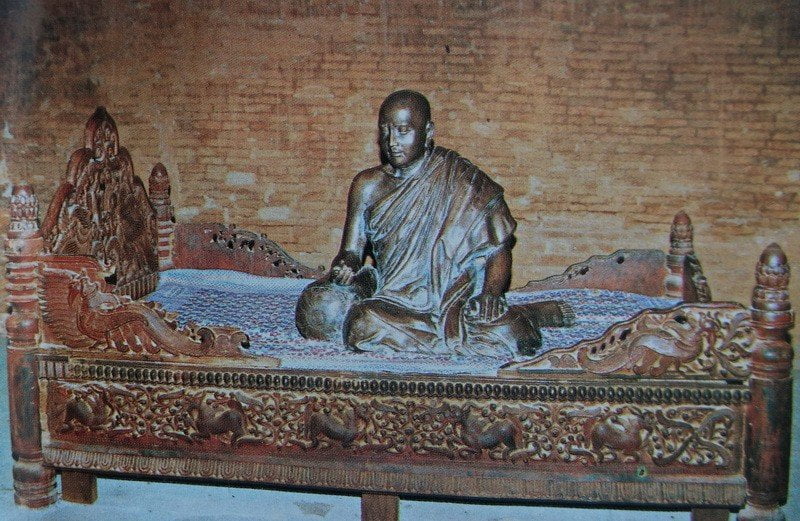