Golden Rock Kyaik hti yo Pagoda was reportedly built in 574BC. Kyaik hti yo translated means “the pagoda carried on the hermit’s head,” named so because of the legend related to the visit Buddha made to the pagoda. Buddha on one of his visits gave to a hermit a strand of his hair, the hermit then passed it on to the king with the request that the hair strand be enshrined in a boulder shaped like the hermit’s head.

The king who had inherited super powers from his father Zawgyi the alchemist (one of the 37 Nats) and his mother, a naga serpent dragon princess found the perfect rock at the bottom of the sea, and with the help of Thagyamin, the head Deva who founded Kyai kti yo claimed this to be the perfect place in which to place the golden rock, they then built a pagoda around the rock and enshrined the hair in the rock, as legend goes this is what prevents the rock from falling down.

For those readers who have visited Golden Rock pagoda, in the Mon state, located 16 km from Kin Pun village, approximately two hours drive from Yangon, you may find Major C. M. Enriquez’ personal experience related to his visit to Golden Rock Kyaik Hto Yo Pagoda recorded in his book “Burmese Wonderland” and written 100 years ago an interesting comparison to what we see today.

The vicissitudes of this journey are often a severe trial to many of the pilgrims who are old men or tender women. One cannot but reflect upon the fact that Kyaik-hti-yo is the object of the most important pilgrimage in Burma, that it is visited yearly by tens of thousands of people of all ages, that the foot of the hill is but 9 miles from the railway over flat country, and that—well, there is no road !

Gleams of welcome sunshine on the rich green foliage were extremely cheering. I could not help remarking the effect of climate on human nature, and contrasting our present gay mood with yesterday, when in rain and mud I seriously weighed the advisability of turning back as we struggled like Christian in a Slough or Despond.

There are several balancing rocks in the vicinity of Kyaik-hti-yo Pagoda. All are crowned with Pagodas. The pedestal of the first is a squarish boulder, slashed across twice both ways by the sword of Thagya Min these cleavages are extremely clean, accurate and complete. Resting upon this cleft boulder is another, with apparently nothing to prevent it toppling over and on its summit a little pagoda. There are two more balancing rocks a little further on, and of course again at Kyaik-hti-yo itself.

The Kyaik-hti-yo legend, like so many others where little authentic history survives, is practically a fairy story. It appears however to assign the foundation of the pagoda to Naga Weiza, a Taling King of Thaton, who married a princess called Shwe Nan Kpn found on the hill. She was born from an egg, lived unhappily at Thaton, was sent home, was chased by a tiger, and died of fright and fatigue. A realistic group of figures near the pagoda shows her dead on the ground with her foster parents beside her. The story records that the foster-father Hpo Kaw Luk was so enraged at her treatment that he summoned the neighboring Karens to pull down the pagoda with ropes. The Karens however were turned into monkeys, their cries — Kyo Kwe Kyo Shawk (Coil the rope on the other hand) being to this day Like the cries of men.

The legend of the foundation of the pagoda is mixed up with the above tale, and is better separated. It states that Teik-tha Yathe, the Hermit of the hill, invited the Thagya Min (The King of Heaven) to find a stone shaped like his (the hermit’s) head, which should be balanced by magic as if on the shoulders of a man leaning forward.

Various stones were brought, but were all rejected by the Thagya Min, who cleft them with his sword as already described. Eventually the Thagya Min brought a stone himself which he found floating on the sea, and this by his divine power he poised upon the edge of the cliff. It did not in fact touch the ground until the Karens tried to pull it down, and a very small part of it rests on the earth even now. Upon this miraculously balanced rock the Thagya Min and the King of Thaton between them, built the pagoda, enshrining therein hairs of Buddha. They called it Kyak-i-thi-ro which is the Talaing for Carried on the Golden Hermit’s Head. The Burmese however have corrupted the words into Kyaik-hti-yo.

The situation of Kyaik-hti-yo is truly remarkable. The hill-top is open and grassy, with boulders strewn about, and splendid views on either side. The scene must be attractive during a festival, when men and women crowd up in bright sunshine in all their pretty silks. There are several sheds for the use of pilgrims, and a sign board, apparently in German, which reads — Using shoes and an umbrella are prohibited. I don’t know what it means, but I suppose something or other is Verboten. Someone has laid down a tiled pavement which ends with railings and a precipice ; and beyond. that is the famous pagoda—floating, as it were, in space. 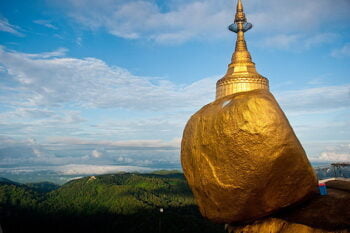 On the edge of the cliff—in fact over the edge as it seems—is balanced a vast boulder, round like a football, and said to be 100 feet in circumference. It is entirely overlaid with gold-leaf, and the small golden pagoda of Kyaik-hti-yo rests upon it. The boulder is round underneath, and sits upon its pedestal as an egg sits on a table. In this incredible position it has stood poised over an abyss, I suppose for hundreds of thousands of years, and it is impossible to imagine what freakish law keeps it from plunging two thousand feet into the valleys below. The boulder is easily rocked by applying the shoulder to it. The extent of motion is clearly indicated by the bending and straightening of a bamboo stick wedged under it. I had personally disbelieved that a stone so great and so perilously situated could rock, and was seized with panic lest we should be responsible for over-setting it altogether.

Wonderful all this is; and almost equally so the view that evening, when the wind tore away the mists, revealing on one side exquisite hill scenery washed with deep, rich colours ; and on the other more hills, banks of cloud, and wet blue plains stretching away till they met a sky as wet and as wonderful.