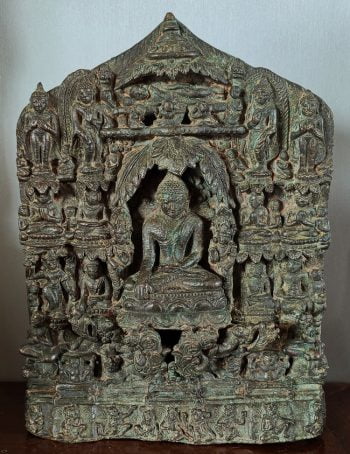 Around the 8th century Buddhist art flourished under the Pala kings of Magadha, who ruled much of Bihar and Bengal (Bangladesh), they were then succeeded by the Sena dynasty which ruled for a little over a century (1097-1225). Buddhism in this region after this went into a decline but flourished in other parts of Southeast Asia and China.

We would assume the presentation of the scenes in this Burmese Pagan bronze eight scene Buddhist stele are presented in the way the artisan or person who commissioned the work has interpreted the scenes to his own understanding of the teachings related to the eight great events in life of the Buddha. Works of art like this are all individual in their presentation, even though they are depicting similar events.

The Buddha’s birth and the important events leading up to his enlightenment, and eventual death as well as the seven weeks after enlightenment have remained relatively consistent. But as it is in the Christian religion where each arm of the Christian faith teaches its own interpretation of events, they all adhere to the basic foundations. Buddhist also have their own interpretation of events, and they can vary, depending on which school of Buddhism one practices.

This attempt to describe the events on this particular stele is a bare bones description of the events from our understanding and interpretations gleaned from various Buddhist texts and Buddhist iconography depicting the events that we have studied and they may not all be correct.

So here goes – The eight great events from the base upwards:

EVENTS ACROSS THE BASE

On each end of the stele is a devotee of the Buddha kneeling with hand gesture in Anjali mudra. The Buddha had 10 primary attendants.

The second figure from the left of the stele is easily recognizable, she is the Earth Goddess (Vasundhari – Pali or Wathundaye – Burmese). Visudhara also known as Wathundaye, and in Indian sculptures she is referred to as Bhumidevi and has become one of the main figures in the artistic expression in Buddhist iconography, where she is seen wringing from her hair the water gathered from the Buddha’s past merit of giving alms in a previous life.

The five figures to the right of Vasundhari are likely Mara’s daughters, sent by Mara to seduce and distract the Buddha from his path to enlightenment. The daughters named, Lust (Raga), Craving (Trsna) and Discontent (Arati) are the names more frequently mentioned in Buddhist texts, but some literature mention two more daughters “Pride” and “Fear”. Possibly the five figures across the base represent the five daughters. Several Indian stele we have seen also depict five dancing ladies who are described as Mara’s daughters.

The daughters promise to their father

There is one more figure on the base, next to the monk on the far right is a more masculine figure, with what looks like the right hand in Abhaya mudra, it also appears to be wearing a crown, this could be the representation of the Buddha sitting at ease after resisting the temptations put before him by Mara’s daughters.

The Buddha’s reaction to Mara’s daughters

(the tier above the base)

Offering alms to the Buddha after enlightenment

On the opposite side a Buddha is seated with hand gesture in Bhumisparsa mudra with two disciples next to him holding an alms bowl, this could be a representation of Trapusa and Bahalika, the first two lay disciples. The first account of these two disciples appears in the Vinaya section of the Tripitaka where they offer the Buddha his first meal after enlightenment.

CENTRAL FIGURE OF The BUDDHA

TAMING OF The NALAGIRI ELEPHANT 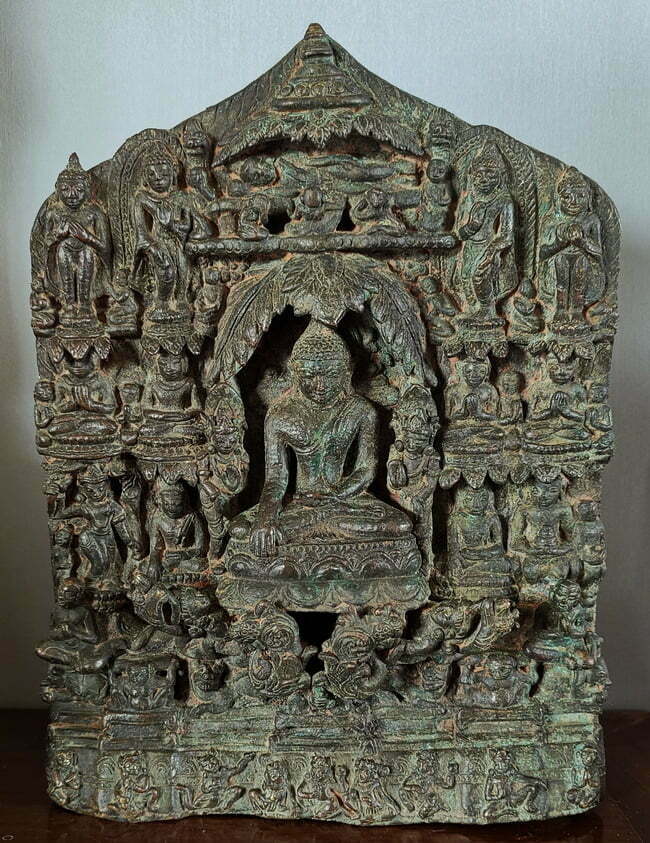