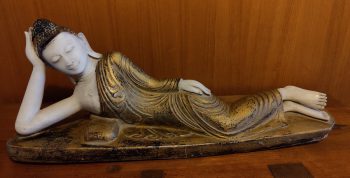 The Burmese Mandalay style Buddha Statue is among the most decorative of all Buddha statues in Burma. The robe is often elaborately layered with three dimensional folds decorated with glass mosaics and delicate scroll work around the edges using thayo lacquer. The hair curls are usually indicated by small flattish nodules using thayo lacquer or carved into the stone for definition. This style is often seen with a straight nose, flared nostrils and a cleft in the centre of the top lip.

The use of glass mosaics can vary, some are fully decorated, others are seen with glass mosaics around the edges of the robe, lapel and sometimes the band across the forehead. Glass stones are also a feature of the Mandalay style Buddha statue, often forming medallions on the body and hairband.

Mandalay remained the capital of Burma for 26 years until the British conquered the city and exiled the last King of Burma and his queen to India, taking over the Mandalay Palace and turning it into a British Army garrison.

Mandalay is the second largest city in Burma, it became the royal capital in 1857 after King Mindon moved his palace from the then capital Amarapura to the foot of Mandalay hill. He built a library dedicated to the Buddhist scriptures and from this time Mandalay was referred to as the centre for Buddhist learning and considered to be the heart of Burma. It has also been referred to as the “City of Gems”.

The Burmese Mandalay style Buddha images are recognized by the full rounded usnisha on the top centre of the head, a wide face with features set well apart and child like, a narrow band across the top of the forehead which as a rule ends above the top of both ears or sometimes at the base of the temple. The Mandalay style Buddha can be seen in a standing, sitting or reclining pose. 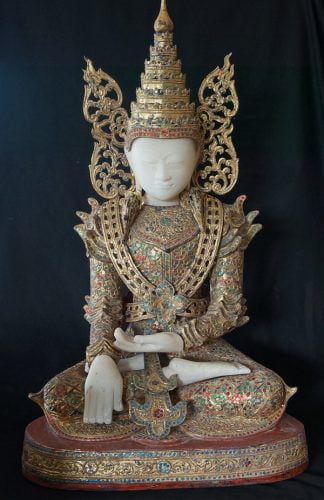 The Mandalay Jambhupati Buddha statue is referred to as the royal king Buddha or royal crowned Buddha and is quite different in style to the traditional Mandalay Buddha statue, this style is often seen with a crown resembling a pagoda with several tiers made from meta,l with a small usnisha on the top. Large side flanges attached to the crown flank the shoulders, this style is also sometimes seen with metal regalia, the body decorated in a fish scale pattern with coloured with thayo lacquer and glass mosaics.

Mandalay situated on the Irrawaddy River is the second largest city in Myanmar. It was the capital of the last independent Burmese kingdom founded by King Mindon who moved the royal capital from Amarapura in 1857 to Mandalay. During this time, it was referred to as the Kingdom of “Yadanarbon”.

The Mandalay style reclining Buddha statue is also referred to as “Yadanarbon sleeping Buddha in Burma.”

Images showing the dying, sleeping or resting Buddha in the reclining posture refers to the time when the Buddha became ill after eating contaminated food, resulting in food poisoning and depicts his final moments when he entered into Nirvana. The reclining image of the Buddha is also referred to as the Buddha in Mahaparinirvna. He is sometimes shown with his head resting on a pillow or with his elbow bent and his head resting on his palm. 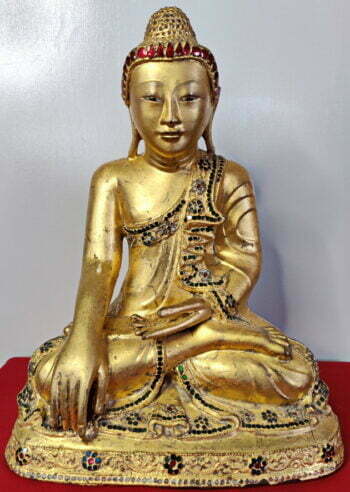 The position of the feet seen on the reclining Buddha image indicates whether he is sleeping or dying, the two feet misaligned are that of the sleeping or resting Buddha, whereas if the feet are aligned it is that of the Buddha entering into nirvana (parinirvana or mahaparinirvana), the stage in which can only be attained by enlightened souls.

The reclining Buddha was first depicted in Gandhara sculptures between 50BC and 75AD and is a popular iconographic representation of the Buddha’s last moments and is seen in Thai, Indian, Burmese, Lao and Chinese sculptures.