King Mindon was born in 1814 in Amarapura and died in 1878 in Mandalay, he was most notable for his reforms and cultural advancement before the British Colonial period. In 1872 his Chief Minister Kinwun Mingyi U Gaung was sent on a diplomatic mission to London, Rome, and Paris in his endeavors to secure Myanmar’s status as an independent country and to appeal for restoration of lost territory.

Burmese King Mindon’s Ploughing Ceremony in the Royal paddy Fields and the three most fundamental needs required for his people:

The three most fundamental needs:

(1) Life security – A good strong army is a first and foremost need for life security
(2) Food security – Food production, agriculture
(3) Water security. – water source and storage is the third. In all civilization

The above three needs are the primary concerns of the rulers or governments. Myanmar was no exception. In any period of Myanmar’s history, the first thing that the kings did, once they came to the throne was to set up defence frontier outposts, reorganize the army, repair arable lands and reclaim new agricultural lands, repair old irrigation systems and water storages and building new ones.

In addition to these practical down-to-earth activities, Myanmar kings turned also to their ritual and ceremonial aspects of these activities, such as rain-calling rites and harvest-promoting rites. When monsoon approaches in the month of Nayone [June] farmers are busy with agricultural activities beginning with ploughing.

Myanmar kings were accustomed to initiating the yearly ploughing of by the farmers to inspire and encourage them to gain good harvests. During  the Pagan dynasty of 55 kings, four kings were recorded to have performed ploughing ceremonies yearly during their reigns. They were known by names prefixed with the word “Htun” meaning plough.

King Mindon’s predecessors, Bodawpaya, Bagyidaw and Thayawady, performed the ploughing ceremony at least once during their reigns and recorded their performances. The court bards were obliged to compose special verses or songs to mark the occasion. When King Mindon performed his ploughing ceremony, the following song was composed:

With a golden whip of Yamaha cane, (Yamaha is the best species of cane in the Myanmar forest)
Royal legs stepped on the plough
Pulled by milky-white bullock twin,
Entering royal paddy field for good harvest of grain
Pray, Shwe bein nyin [King fisher] bird in the sky
Bring down rain.

There were two eyewitnesses who recorded graphically King Mindon’s ploughing ceremony. One was the famous court artist Saya Chone who painted the scene he saw on a white papyrus [Parabike Hpyu]. It is now kept in the British Museum in London. The other was a high-ranking British serviceman J.G Scott who wrote many books on Myanmar, one of which he pen-named Shway Yoe was, “The Burman, his life and notions”. In it, he detailed the record of his eye-witnessed description of King Mindon’s “Gracious Ploughing Ceremony”. The painter and the writer tallied in their respective pictorial and literary depiction of the great event.

The following is the reproduction of the paragraph on this subject from the book Mandalay Gazette Vol.14. p.p 66-67 compiled by Mr H.F Searle, Settlement Officer, No. III Party, published by Rangoon Supdt., Government Printing and Stationery, Burma, 1928.

“The Lehtunmigalar pwé was customary held in the fields under the Aungbinle Tank and after the founding of Mandalay, it took place on a site east of the city on the road to Yankin-taung. Starting from a point immediately west of the north end of Thayetkon Village a square plot was marked out towards the south containing 20 pés [y,f] 10 for the king and 10 for the queen. Bazaar stalls were erected along the road from the east gate [Uteik].

The king came out in a royal state with the court and proceeded down the Nadi chaung to a temporary palace in the Mingala Uyin. Shrines were erected for the 37 nats near the place where the ploughing was to take place. When the auspicious moment arrived, the king wearing his royal robes and regalia ploughed in a large field on the west side of the area marked out and was followed by the princes and ministers and members of the court doing likewise, also in full dress, according to their precedence.

The ploughs and bullocks were richly ornamented and were called gold and silver ploughs. The king then returned to his temporary palace and remained there for three days with the court; during this period pwes and bands were kept going night and day and continued offerings were made to the thirty-seven nats. The king then returned to the palace. The ceremony usually took place in the latter half of Nayon; the object was to obtain a good agricultural season.”

There was two rain-calling rites performed by Myanmar kings and people since the Pagan dynasty. First was the propitiation of Nat-Spirit “Moe Khaung Kyaw Swa” by holding a tug of war to invoke and request him to release rain clouds. The second was the propitiation of Nga Yant Min Fish idol by washing or sprinkling it with clear scented water and chanting Nga Yant Min paritta to bring down rain. This rite was introduced by Prince Min Shin Saw of the Pagan dynasty who founded a new town at Htun ton Pu-Tet [Bo tet kon today] near Yankin hill due east of Mandalay palace city. After heavy rain came down on the performance of this rite, the prince was advised by the monks to place the Nga Yant Min idol in a natural pond formed by springs in the mouth of a big cave on the summit of Yankin hill. King Mindon promoted these two rains calling rites.

Till today Mandalay people hold these rites when there is a scarcity of rain and they believe rain does come.

Apart from the repair and constant maintenance of Aung bin le and Nanda lakes and many other reservoirs and dams around Mandalay which previous kings constructed, King Mindon dug a new river “Yatana Nadi” to the east of the palace city. It is one of the main sources of water supply for the city dwellers. There are also springs, streams and falls in the offshoots of Shan plateau in the near distances e.g. Yeytagun hill.

Sanctification of the palace city and capital city

Myanmar kings, being Buddhist, were promoters of Buddhism. Besides, taking the role model of Emperor Asoka, they aspired to become “Sasana dayika” [The inheritor of Buddha Sasana] by becoming themselves at least a temporary monk to preach dharma or by ordaining monks for dharma preaching. Maintenance and renovation of old religious monuments and building new ones were also part of their religious activities. In performing such religious merits, King Mindon had three categories.

Firstly, sacred images and statues he brought from Amarapura to his new capital city Ratanapon. Secondly, religious edifices and sacred images were already located in Mandalay areas long before he moved there. Thirdly, the monuments and images he built and made during his reign.

To begin with the first category, we have two sacred Buddha images brought from Amarapura and Anya Thihataw pagoda on an island near Thabeik-kyin town north of Mandalay. The former was an iron image of medium size and weight named “Sanda Mani”. The latter was a small statue of Buddha carved out of a thrakhan wood, about 2 ½ inches. Each has its legend and story. Regarding the iron image, it was cast by King Bodawpaya in 1802. While he was personally supervising the construction of a gigantic brick stupa at Mingun on the west bank of the Ayeyawady River, he was residing in a temporary palace on the island now known as Nantaw ya kyun [Palace Island]. There he cast an iron sitting Buddha Image of 11368 viss (approximately 18 ton) in weight, probably to be installed at the brick stupa. But the stupa was left unfinished. The iron image was then taken to his capital city Amarapura.

Today, the iron image Sandamani is enshrined on the site of King Mindon’s temporary palace “Nan Myey Bontha”. In 1866, a rebellion broke out at Nan Myey Bontha led by Mindon’s two sons Prince Myin Kun and Myin Khone Taing. Though King Mindon narrowly escaped assassination, his brother Crown Prince Kanaung, and Princes Malun, Saku, and Pyinsi were killed in his defence. Nan Myey Bontha was dismantled, and the fallen princes were entombed on the site. A year later in 1867, Sandarmani iron image was enshrined in a brick temple about two cubits afar from the tombs. As the iron image is now heavily gilt, it looks like a gold image.

The second statue was a thara khan wood statue of 2 ½ inches, said to be one of the statues carved out of the Thiknet wood which King Alaungsithu of the Bagan dynasty received as a gift from Sakka deva, during his maritime journey along Myanmar sea coasts. It was enshrined in Anya Thiha taw pagoda on an island near Thabeikkyin town. This pagoda was the favourite place for pilgrimage by Myanmar kings not only because of the sublimity of the pagoda but also of the scenic beauty of the island. It was during his visit to this pagoda that King Singu (1976 – 1782), son of King Hsinbyushin was overthrown by his cousin Prince of Phaungka who took over the Inwa Palace with his armed followers. On rushing back to Inwa, King Singu Min met his untimely end by the sword of Bodawpaya.

Since then, Anya Thiha taw pagoda became associated with that tragic event. No later Myanmar king dared visit it for fear of losing his life. But when and why the little thanakhan statue enshrined there, appeared in the shrine room of Mandalay palace? It may have been either King Mindon or one of his predecessors who brought the said statue to the palace to worship as he dared not risk losing his life and throne in the same way King Singu Min did.

(Note: On the 11th November 2012 an earth quake magnitude 6.8 at Thabeikkyin which damaged Anya Thiha Taw pagoda situated on an island in the Ayeyarwady River)

When the British occupied Mandalay palace, after deposing and deporting King Thibaw and the royal family to Ratnagiri in India, all treasures in the palace were looted including images and statues made of gold and precious stones. The remainder were collected and sent to Shwe Kyi Myint pagoda located in the southwest outside the palace city. The small statue is now on display in the Sanctorum of Shwe Kyi Myint temple, west Mandalay. 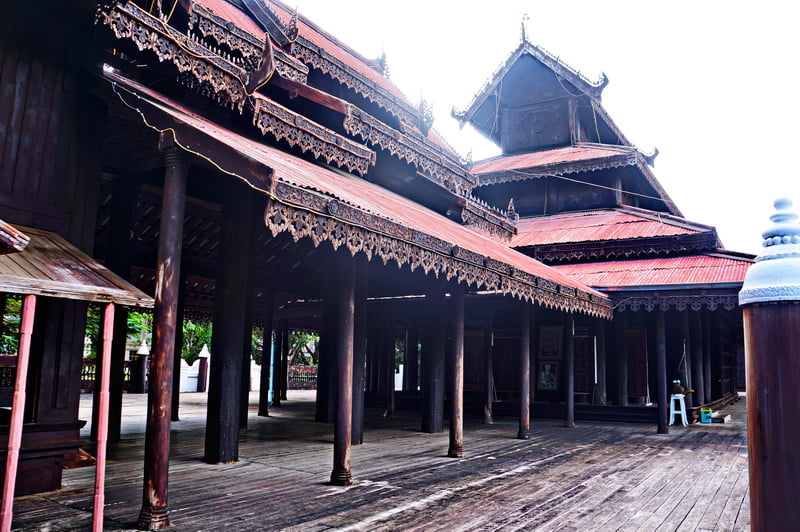