Burmese Ethnology Burmese Origins  – Records related to very early Burmese history before the advent of Buddhism are rare, due to Burma’s turbulent history of invasions, tribal battles, excessive vandalism by its victors, internal conflicts, and earthquakes.

Many historians have theorized and written about its ancient history, much of it derived from some existing Burmese chronicles written on ancient stone slabs which postdate the introduction of Buddhism and most dated to the middle of the 11th century as well as archeological discoveries predating Buddhism, dating to the bronze age which gives some insight into the original early inhabitants of Burma.

Due to Burma’s turbulent history and its geographical location which borders the bay of Bengal, Bangladesh, Laos, Thailand and China have presented a myriad of controversial opinions regarding the origins of its people and of its current name ‘Myanmar’. It is among one of the most fascinating and interesting countries worldwide. The people of Myanmar are diverse with more than 100 ethnic groups, rich in culture and the arts.

The Origins of the name Myanmar

In a paper written by Burmese Archeologist Bhone Tint Kyaw ‘The History of Brahmmar called Pyu‘  he states that Myanmar’s original name in Pali is Bammar or Brahmmar, in Sanskrit, it is pronounced Brah-mar. The former Professor of the History Department of Yangoon University from 1946/7 W. S. Desai, mentioned that India traditionally called Burma “Brahmmar Desa”.

He goes on to say that the name Brahmmar changed to Mranmmar and eventually Myanmar and was known as Myanmar in 3 CE. The Tang records between 7 – 13th referred to Myanmar as Pyu. The Song records from the 11 – 13th centuries and the Yuan-Shi records in the 13 – 14th centuries referred to the country of Bammar as Pagan, Myanmar, and Pyu.

The views of another well-known Archeologist Kaw Sein Ko’s at the time of his writings in the late 19th century ‘Burmese Sketches’, mentioned that there was a great deal of controversy related to the derivation of the term ‘Mranma’. Two opposing theories were held, whilst Arthur P Phayre (British Historian) says that the word is derived from ‘Brahma’, Paul Ambroise Bigandet (1813 – 1894), a French Catholic Missionary and Buddhist Scholar traces it to ‘Mein’, the Chinese designation for Burma. The word Mein however did not occur in Chinese history until around 1000 AD., prior to that and during the Tang dynasty (618-907 AD), Burma was known to the Chinese as Piao, which is pronounced Pyu or Piu by the Cantonese, retaining the archaic pronunciation in the Chinese language.

According to Burmese history, the appellation ‘Mranma’ did not come into use till the amalgamation of the Pyu, Thet, and Kanyan tribes in the first century AD., theorizing that to a greater extent the name ‘Mranma’ could be older than the name ‘Mein’ given by the Chinese. 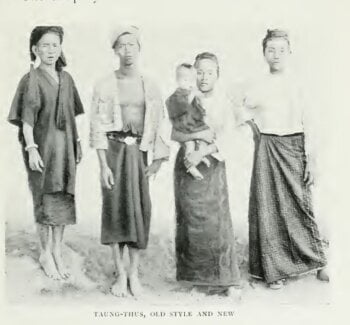 Ethnology and Origins of the People of Burma

However, according to Bhone Tint Kyaw’s paper, he says that Luce in his writings didn’t mention that Brahmmar is the original name of Bammar, Myanmar, and Pyu that are mentioned in the ancient Bammar inscriptions and that Luce neglected all the ancient Bammar’s chronicles in the writings of his paper ‘Old Kyaukse and coming of the Burmans‘.

More than one century ago Burma’s first Archeologist  Kaw Sein Ko wrote in his book “Burmese sketches’ that Burma was originally occupied by a Negrito race, which extended its habitat from the Andamans to the Philippines. After this it was succeeded by another of a different stock, the Mon-Khmer, represented by the Talaings (Mon), and Cambodians, as well as some scattered tribes of Khasias in Assam, Palaungs, and Was in the Northern Shan States.

It is assumed that the Mon-Khmer group originally came from Yunnan and Kueichou provinces of China, followed by the Karens who are thought to have originally migrated into Burma from China and Tibet.

These people were succeeded by the Tibeto-Burman tribes of which the Chins were the earlier and the Marus, Zis, and Lashis of the Kachin Hills were the later arrivals. These newcomers migrated to Burma from Eastern Tibet, where the allied tribes, the Lolos, Mantzu, and Sifans are still found.

THE FOUR ETHNIC GROUPS IN BURMA

The Negrito (The earliest inhabitants of Arakan)
The Mon-Khmer (A people of Indonesian stock, related to the early inhabitants of Thailand and Cambodia)
The Shan-Karen from China (an ethnolinguistic group of the Sino-Tibetan language)
The Tibetan 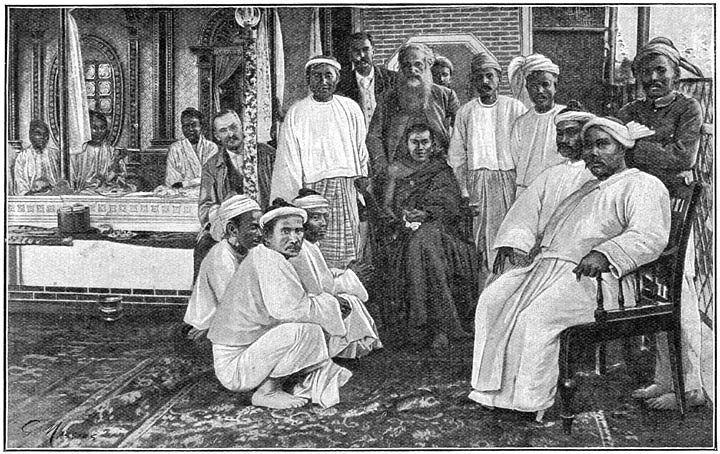