Burmese Buddhist Andagu Stone Stelae carvings are extraordinary works of art, depicting in minute detail scenes related to the Buddhas path to Enlightenment whilst meditating under the Bodhi tree.

The Burmese andagu stone sculptures show the close relationship they had with their Indian neighbors, features found in similar Buddhist sculptures in black stone from India can also been seen in the Burmese andagu’s stone carvings sculpted during the Pagan era. The Burmese sculptures usually show the Buddha in the earth touching gesture, seated crossed legged on a double lotus pedestal, flanked on either side by a Bodhisattva.

The scenes are intricately carved in minute detail around the central Buddha, each scene representing one of the great events in the life of the Buddha. Some of the large andagu stone stele also show the events of both the before and the seven weeks after Enlightenment.

The stone used in the carving of these small plaques is thought to be in the family of pyrophyllites, a soft stone with a beige/yellow appearance resembling ivory and easy to carve.

According to Claudine Bautze-Picron’s study (an excellent study, and one of the more in-depth studies we have found on Burmese andagu stone).

(quoted from her publication on andagu stone images) The original concept of this iconography with the central image surrounded by seven further ones is to be traced in Magadha (Bihar), probably in the region of Nalanda where a large number of images reproducing the eight major events of the Buddha’s life have been produced from the 8th century and onwards.

Known by art-historians since a long time already, such small images, together with a few more carved in the typical dark-grey, almost black stone of Bihar/Bengal, have been discovered in a wide area spread over North India, Sri Lanka, Tibet and Burma. Due to the fact that a group of fairly well preserved examples was initially collected at Pagan, it has generally been assumed that these sculptures must have been produced in Burma, more particularly at Pagan  whereas examples recovered in India or Sri Lanka remained isolated in the context of their finding and whereas the images observed in Tibetan monasteries were clearly imported from countries located south of the Himalaya.

However, this pyrophyllite has also been used in Bihar and Bengal to illustrate other iconographic types, be they Buddhist or even Brahmanical, and subtle stylistic variances reveal conspicuously different geographical origins. (unquote)

The scenes in the larger andagu stone sculptures vary in the order, in which the scenes are placed, the dying Buddha in a lying down position in parinirvana (entering into nirvana or dying), is always seen on the top above the central Buddha, and is always present in the eight scene plaques.

The central figure of the Buddha in the Indian style eight scene Buddhist plaques is seen in both standing and seated postures, whereas the Burmese plaques are mostly showing the Buddha seated cross legged in the lotus position (Padmasana or asana), and rarely seen in a standing position except for those depicting just one scene of the Enlightened Buddha.

The Buddha in the eight scene carvings is usually flanked by his two main disciples, either in the form of Bodhisattva’s or monks. The most common scenes are the nativity scene, showing Maya giving birth to Siddhartha, the taming of the Nalagari elephant, the descent from Tavatimhsa heaven, the first sermon, the Parileyyaka when the Buddha talked about the Dharma and the twin miracles, with the central Buddha and the Buddha in Parinirvana making up the eight scenes.

Elephants, lions and other mythological entities are carved into the lower part of the plaques, whilst two Naga Kings support the Buddha. Some andagu sculptures show Mara’s army and his dancing daughters.

According to Gordon Luce’s book “Old Burma – Early Pagan”, the scenes shown in these plaques are not always in the same order and that they can vary in their placement. 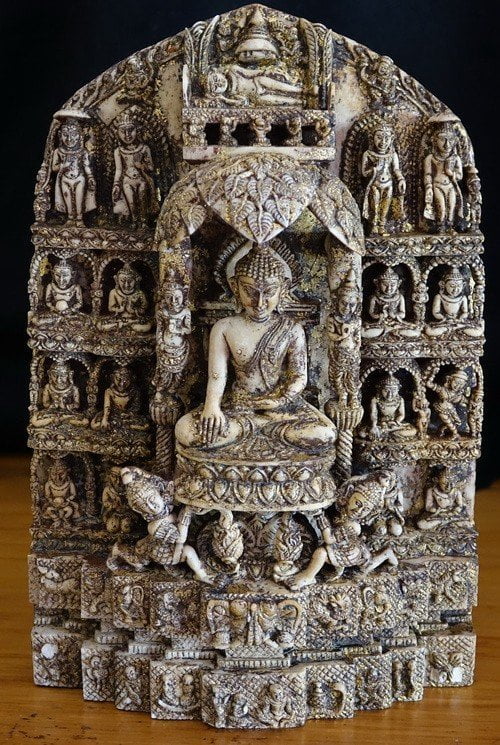