A rare Burmese Black Stone Carving of Mithuna Couple, the romantic couple seen in many Indian temples, although not 100% certain. The Mithuna couple is depicted in wall carvings and sculptures in many parts of India. The couple is often seen embracing or standing together with arms around each other, they symbolize harmony and companionship, with all of the creation emanating from the union of a couple.

We refer to this stone carving as Burmese, mainly because that is where we acquired it and the figures have similarities to some of the figures seen in carvings and wall paintings in Pagan temples.
Read More

it is possible that during the Mon and Pyu periods dating from the 3rd to 9th century when there was a strong Hindu influence introduced into Myanmar that this black stone carving could have been brought to Myanmar by traders and Pilgrim monks from South India who crossed the Gulf of Martaban, disembarking at the Port of Thaton in Mon state.

The carving style in this icon compared to those of a similar theme to those in India is primitive. Tool marks are evident, indicating that whoever carved this piece didn’t have access to more refined carving tools or that his carving skills were not very sophisticated.

This stone carving is a mystery piece, not only as to its age and origin but also that the stone appears to have a mix of minerals, lighter in places and in some areas a little translucent when looked under the scope in the sunlight. Black jade is the only jade that has both nephrite and jadeite in its composition. We have considered serpentine, but have read that black serpentine is slightly magnetic, this carving is not magnetic.

We have included an example image of the Mithuna couple in the rock-cut Buddhist cave complex at Kuda (dist. Raigrad, Maharashtra), this is the closest example we have found to the carving seen here, especially so with the smaller figure kneeling on the side. 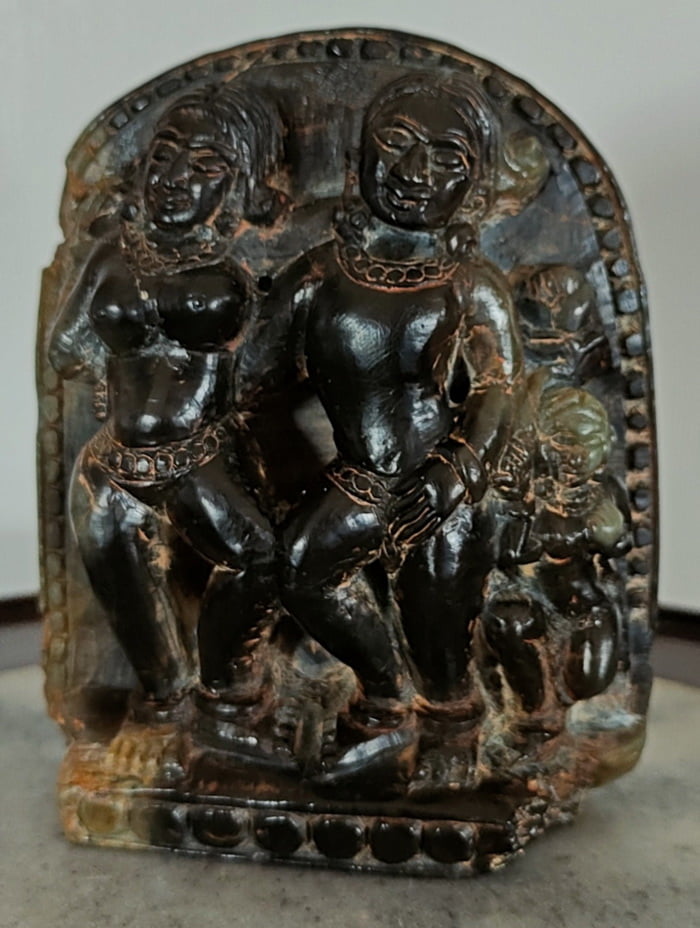