The Buddhist Deity Hayagriva Avatar of Vishnu is depicted in Burmese wall murals in the temples of Pagan and Mrauk-U. Buddhist iconography excavated in Burma in the form of bronze castings of the Buddha, and deities generally associated with Hinduism, was influenced through their interactions with visiting Hindu and Buddhist pilgrims during the first Millennia.

It is believed that there are one hundred and eight depictions of the Hayagriva, this deity is worshiped in parts of S. E. Asia where there is a strong Hindu following. Hayagriva is often represented with several arms, holding a conch shell or sword, sometimes with Lakshmi his consort seated on his knee, usually seated on a lotus flower.

Excerpt from the Book “The Mists of Ramanna“, an excellent historical account of the Mon, Pyu and Pagan kingdoms and their early relationship with India – written By Michael A. Aung-Thwin

Pyü iconography also revealed evidence of tantric and other forms of Mahäyäna Buddhism. Avalokitesvara, Tärä, Mänusi, Jambhala, Lokanätha, and Hayagrïva, all prominent in Mahayana Buddhism, were very much part of the Pyü, and later the Pagán scene. Brahmanism was also well represented in iconography at SrïKsetra. The standing ﬁgures of Vishnu and his consort, Lakshmï, are found together in bold relief on a sandstone slab. Other manifestations of Vishnu were found, one with four arms, standing on his vehicle, Garuda, while another has him reclining on the serpent Ananta, a motif also found at eleventh century Pagán in the Nat-hlaung-gyaung. On three lotus ﬂowers that emerge from the navel of this reclining Visnu are members of the Hindu Trinity: Brahmä, Vishnu, and Shiva.

This mystery bronze disc has intrigued us for many years and is still a source of intrigue. We originally thought the bird on the top of the disc to be that of a peacock, but have concluded that the legs are possibly too thick, and the head with the protrusion possibly rules out the peacock theory, whereas the hamsa or hintha bird is usually shown with thick legs and feet with a protrusion on the head. The hamsa bird is also seen in Indian art, sculptures and mentioned in ancient literature.

Hamsa, a Sankrit word, translated into hintha, the Burmese version of the Hamsa bird. Although the real hamsa bird is a graceful swan like bird it can also fly. According to Mon legends, the ancient city of Hamsawaddy now referred to as Bago, located 91 kilometers north-east of Yangon was founded nearly 2000 years ago.

The hamsa or hintha bird, peacock and naga are significant symbolic creatures in Burma, especially so to the Mon people of Burma. The current Mon flag features a Hamsa bird. The hamsa bird is also seen in Tibetan, Indian and Cambodian Buddhist art and iconography. Stories, myths and legends surrounding the Hamsa bird is bountiful, each with their own connotations and meanings. To learn more about Hayagriva in Buddhism

Our thoughts on this disc is that it is likely Mon or Pyu. The Mons from the early part of the first millennium were worshipers of Vishnu as well as Buddhism. This also fits in with the view that the early Mons had frequent contact with India and that there was a vibrant trade between the Mon city of Thaton and those across the Bay of Bengal and down to south India. 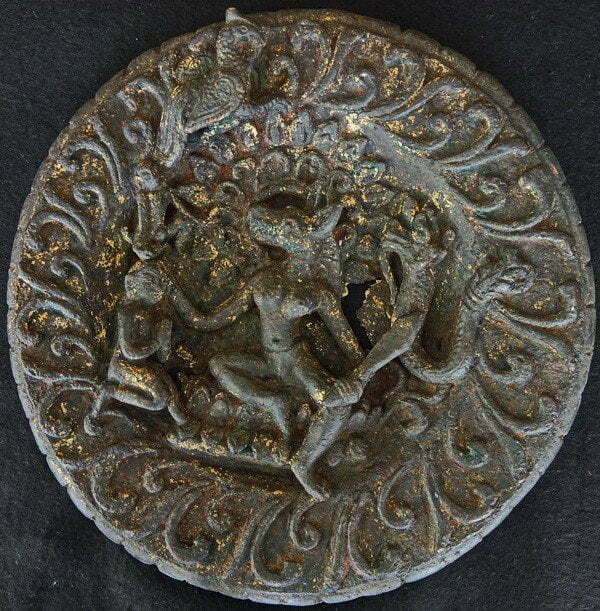