Perhaps because Buddha’s First disciples Tapussa and Bhallika were the first upasaka’s (devotees) and considering the dearth of information about them, there still has been a myriad of legends and stories built up around them, even though there is almost nothing written about them other than what appears in the Vinaya section of the Tripitaka where upon passing and witnessing his peaceful demeanor offered him food. several countries have claimed them as their own with variations in their names. In Essays on Buddhist History and Culture by Ven S. Dhammika he offers some clues as to their origin.

When the Chinese pilgrim Xuanzang was in northern Afghanistan in the 5th century on his way to India he visited two towns, each named after the merchants and each claiming to be their hometowns. Just outside each town was a stupa supposedly enshrining strands of hair from the Awakened One’s head given to Tapussa and Bhallika by the Buddha. One of these towns was Balkh, now in northern Afghanistan, and one quite credible theory is that the town’s name is derived from the name Bhallika. There are ruins from the Buddhist period scattered around Balkh and several of these are certainly stupas, although now most of them look like nothing more than mounds of broken bricks. Some thirty-five kilometers from Balkh and north of the new AH76 highway is a village named Tabus, and although small and obscure the many mounds in the area indicate that it was once a substantial place. It is quite possible that the village’s name is derived from the name Tapussa.

Unfortunately, because of political turmoil and lack of interest in the pre-Islamic history of Afghanistan in that country, it is unlikely that any of these ruins will ever be excavated. Balkh’s museum, formerly the country’s second-largest, was sacked during the Taliban period and most of its Buddhist relics were looted or destroyed.

The ancient Sri Lankans claimed Tapussa and Bhallika as their own. At Tiriyaya on the northeast coast of Sri Lanka, is a beautiful ancient stupa supposedly built by the two merchants to enshrine hair given to them by the Buddha. On an area of flat rock, a little below the top of Tiriyaya’s hill is a Sanskrit inscription in the Pallava Grantha script of South India dating from either the 7th or 8th century. The writer mentions that the stupa was built by Tapussa and Bhallika and then praises its charms and holiness. He also mentions that the name of the place is Girikanda.

Interestingly, the Pujavaliya recounts the legend of the Buddha giving some strands of his hair to the merchants and says that they are now enshrined at Girikanda, showing that this must have been Tiriyaya’s ancient name. The inscription is also interesting because it suggests that some South Indian Tamils were still Buddhist in the 7th or 8th centuries and that some of them were coming to Sri Lanka on pilgrimage. Not to be left behind, the Burmese insist that Tapussa and Bhallika were from their country. The great golden Shwedagon Pagoda in Yangon contains, Burmese legend says, eight hairs that the Buddha gave the two merchants

So what is the truth? Where did the Buddha’s first disciples come from? Let us examine the evidence. Firstly, it is highly unlikely that they came from beyond India, mainly because continental and international trade to and from northern India had hardly begun during the 5th century BCE. Can we really suppose that two men should bring their merchandise all the way from Balkh in the far north of Afghanistan, or take a ship from Sri Lanka or Burma and then a wagon to Bodh Gaya with only the goods they could carry? Highly improbable! What about the Shwedagon Pagoda? The problem here is that this beautiful monument is not mentioned in any documents or inscriptions before the 10th century CE, i.e. some 1500 years after the Buddha, plenty of time for legends to develop. The Vinaya says that the two merchants came from Ukkala which most historians and Indologists identify as being somewhere in Orissa on the east coast of India.

Interestingly, recent archaeological findings would appear to confirm this. A series of small rock-cut caves were recently found in Tarapur, Jaipur District, and in one of them was an inscription in Brahmi script dating from about the 2nd century BCE. As deciphered by J. Jayprakash, epigraphist for the Archaeological Survey of India, the inscription specifically mentioned the names Tapussa and Bhallika, saying that they had made a gift of some kind. Further up the hill where the caves are located are the remains of a stupa and archaeologists surmise that the gift the two men made was the stupa. Unfortunately, this stupa is too ruined to yield a relic that might have originally been in it or any inscription that could clinch the matter. Whatever the case, these discoveries, older than any of the other claims about the two men or any legend make it almost certain that the Buddha’s first disciples Tapussa and Bhallika, were Indians, not Afghanis, Sinhalese, or Burmese. 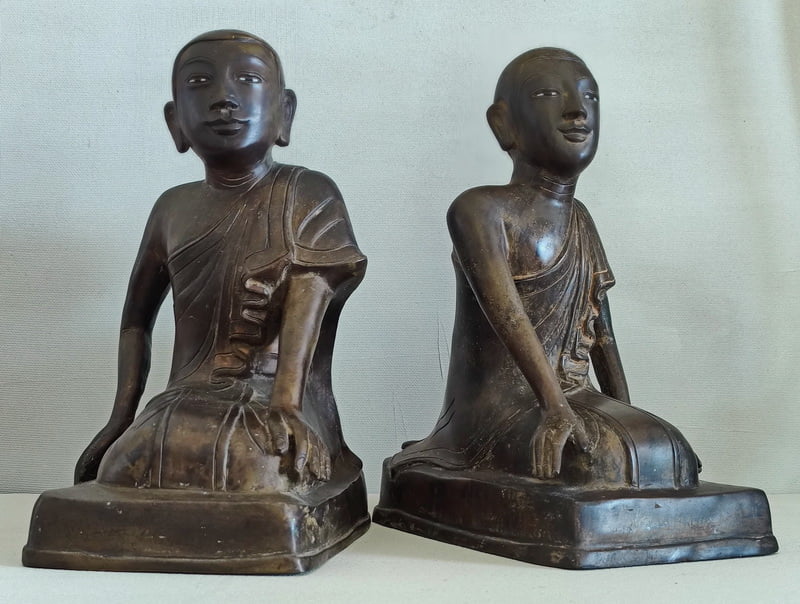