Beginnings of Buddhism in Myanmar

The Beginnings of Buddhism in Myanmar are debatable, it is unclear as to the exact year Buddhism was introduced into Burma and is generally thought by scholars who have researched the subject to be between the 3rd and 5th centuries, there are however some who would say earlier, although there has been no defining proof. A small number of Buddhist relics excavated from the Pyu sites in Sri Ksetra and Beikthano show that there was at least a Buddhist influence, dating from the 5th to 6th centuries.

The earliest practicing Buddhists in Myanmar were the Mon and Pyu peoples. Early Buddhist artifacts and Buddhist art in Burma show that the people of those times worshiped a mix of Theravada and Mahayana Buddhism, as well as Tantric and animist practices.

The Pagan period between the 11th – 14th centuries is undeniably the most significant period in the history of Buddhism in Burma after the first Burman King, King Anawrahta of Pagan converted to Buddhism through his interaction with Shin Arahan, a visiting Buddhist monk, and native of Thaton, who practiced Theravada Buddhism and later his interactions with monks from Sri Lanka who also practiced Theravada Buddhism.

At the beginning of King Anawrahta’s reign, the presence of the Ari monks who practiced a form of Mahayana Buddhism combined with nat and spirit worship, tantrism, naga worship, and Hinduism was the main form of worship.

King Anawrahta wishing to convert his people to the purer form of Buddhism attempted to ban the worship of nats and spirits, but Nat and spirit worship was so entrenched among his people that he agreed to a compromise by legitimizing thirty-seven of the most popular nats.

Today it is more factual that many of these chosen thirty-seven Nat’s have been replaced by others coming into existence much later during the reign of King Mindon (1853-1878) after he revised the list of chosen nat. Thirty-seven nats are still respected and celebrated each year. Around August or September, a large Nat festival is held in the Taung Phone village outside the city of Mandalay. Buddhism in Burma.

In Burma today Theravada Buddhism today is still very much intertwined with Nat and spirit worship and is reflected in much of their art and culture.

Most old monasteries in Myanmar are made from teak wood, with many being no more than two hundred years old, whereas the ancient temples and pagodas seen in historic Bagan and Mrauk-U in Rakhine State are mostly made with bricks or stone, with a few remaining structures surviving for several hundred years.

Burmese Buddha Statues and Buddhist Iconography were influenced initially by their interactions with India during the first millennium. During the Pagan period (849 – 1297), also referred to as the Pagan Kingdom or Empire, a new style of Buddhist iconography developed which is now referred to as Pagan style and has since this period evolved into what is now uniquely Burmese art, with variations in facial features and decoration relevant to the periods in which the particular type of Buddhist iconography was crafted. 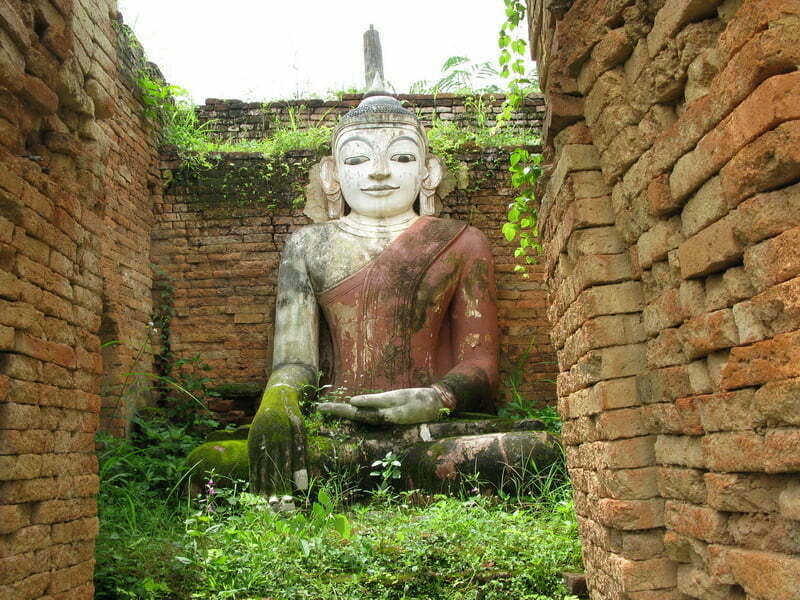