Ancient Capitals of Rakhine Myanmar – Arakan history suggests that Buddhism was introduced into Rakhine state during the lifetime of the Buddha in 563 BCE., although there are several other suggested dates.

The local chronicles of Arakan mention the Indo Aryan people from the Ganges Valley as the founders of the cities of Dhanyawadi and Vesali the two most important capital cities before 1000 A.D. According to local chronicles Dhanyawadi was the main capital up to 350 or 370 A.D., and Vesali from 788 to 957 A.D., although it continued as a capital until 1018 A.D. According to some scholars Vesali was a larger and more thriving port than Dhanyawadi.

Dhanyawadi and Vesali were the last two Royal Arakan capitals, they were unique in that they occupied a narrow valley between the Kaladan and Lemro rivers about 16 miles apart. The Chronicles note that the earliest people who occupied Rakhine were Negritos, they were referred to as “Bilis” (cannibals), the direct descendants of Neolithic people.

Most kings during this early period bore the title of Suriya or Canda. The most notable of Buddhist kings during the life time of the Buddha, King Canda Suriya was said to have met with the Buddha on Selargiri hill, whereupon he invited the Buddha to his home, the story relates that the Buddha stayed for seven days. When the Buddha was ready to go the King asked him if he would leave an image of himself, the Buddha agreed.

This is purely legend, some scholars today state that The Buddha never actually set foot on Burmese soil. In Mrauk-Oo (Mrauk-U) there is a small museum displaying some archeological finds and another larger museum in Sittwe with a collection of what has been found from that period and no doubt there is still much to be discovered, an archaeologists dream.

Inscriptions excavated in Mrauk-u have enabled archeologists and historians to reconstruct in a broader sense the history of the period between the 5th and 11th centuries. The most important finds are the royal edicts, the Prasashtis, which provides the framework for the Political history. Of the four extant prashastis, three are inscribed on the Shitthaung pillar, a monolith which appears to have been part of a royal cult designed to ensure the prosperity of the country through the continuance of the royal dharma.

The Ancient Capitals of Rakhine Myanmar

Watching the sun rise over Vesali is Magic 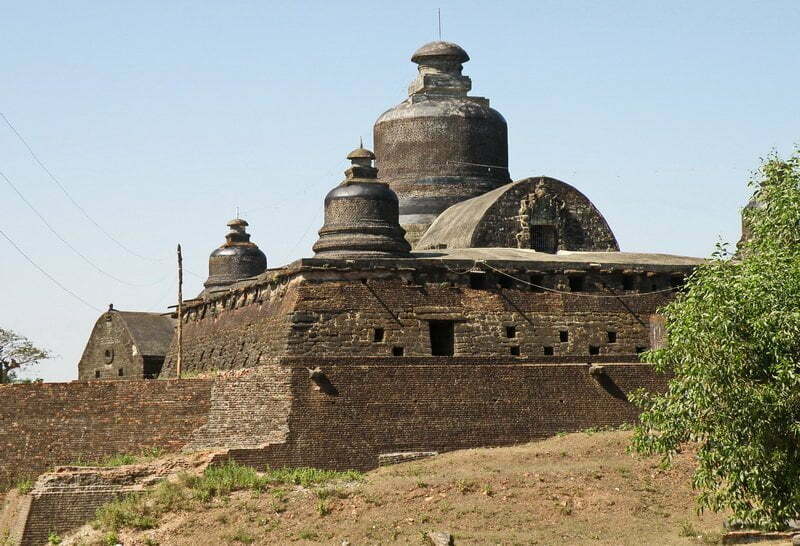