This is an interesting paper written by M. A Lichtenberg Van Mierlo  About Nepalese Sakya Crafts and Tamang Buddhist Art made by craftsmen of the Sakya clan in Petan, a clan whose lineage stems back to the time of the Buddha and of which the historical Buddha was born into.

While trekking and residing in the northern and central mountain areas of Nepal and visiting the temples and house shrines of the local Buddhists I came to distinguish and appreciate old statues known as ‘Tamang’. In the vast field of publications on Buddhist art in general and on the art of Nepal in particular, these ‘Tamang’ statues are only casually mentioned if not overlooked. This art style has not attracted much attention because of the overwhelming and overshadowing consideration shown to the more hierarchic and sophisticated creations of both Nepal and Tibet. Another reason for being neglected by historians of art is that the production of ‘Tamang’ bronzes was considerably less than the production of Nepalese and Tibetan bronzes. The bronzes under discussion in this article all belong to the cult of Tantric Buddhism.

Collectors and scholars have approached and evaluated eastern art almost exclusively by western standards. So far it has been a rule of historians of art when they discuss eastern art to focus only on the main style of a period and area, to trace its origin and influence, and to consider other trends as an imitative sub-style or as being folk art. With the differentiation of the ‘Tamang’ bronzes from the gross of Nepalese sculpture which developed out of the Gupta and Pala-Sena traditions, we witness the simultaneous existence of two different art idioms.

Individualism and the search for a new art idiom are totally absent in eastern art. In essence, eastern art is transcendental, it aims at expressing the various moments of man’s experience of the sacred. The eastern artist adheres strictly to a fixed iconographic code, he mainly imitates a model. He will have succeeded and will be considered successful only if he has been able to recreate and endow the icon with mystical qualities. Tantric Buddhist art especially serves mystical-magical purposes. Aesthetics is subservient to it. When confronted with eastern art one should invariably look for its mystical-magical qualities The art products and ritual implements of Tantric Buddhism are supposed to be magnetized with subtle powers and to have a subconscious activating capacity.

As far as I know, no attempt has been made to categorize and differentiate the style known as ‘Tamang’. Its style characteristics show a marked difference from what is generally acknowledged as being typical for Nepalese and Tibetan metal sculpture. When occasionally a ‘Tamang’ statue is discussed, it has been classified as being Nepalese without further differentiation or has been wrongly quoted as being Tibetan. Stylistically the ‘Tamang’ bronzes differ considerably from other Nepalese productions, whether Buddhist or Hindu. Considering their specific art idiom and particular atmosphere they deserve to be regarded as a distinctive style.

The appellation ‘Tamang’ is a popular appellation. It is partly incorrect because this type of statue was mainly made in Patan in the Kathmandu Valley by members of the Sakya caste. I general they were commissioned and bought by Tamangs, during a pilgrimage to the sacred places of the Valley and therefore came to be known as ‘Tamang’, although other Buddhist tribes such as Sherpa, Gurung, and pilgrims from as far as Dolpo and Tibet too purchased these bronzes. A Tamang layman informant living in the Kathmandu Valley asserted that not all the ‘Tamang’ statues were made by members of the Sakya caste, but that some had been produced by Tamangs themselves. As Tamang paintings were created by Tamangs, so also bronzes were cast by them. He further informed me that Tamangs did carve wood sculptures.

The ‘Tamang’ bronzes show compositional and stylistic similarities to Buddhist metal sculptures found in Bihar and Bengal, dated from the eighth to the twelfth centuries A.D., which do not show any stylistic relationship with the Pala-Sena art of the same period. These Indian bronzes are the subject of a study by B.N. Mukherjee who distinguishes them from the Pala-Sena bronzes. Correctly he calls these works a parallel style separate from the well-known Pala-Sena school. Mukherjee demonstrates that these bronzes are not imitations of Pala-Sena works and that the difference between the two groups of sculptors relates chiefly to their ideas of and approach to plastic art, particularly to the art of creating human figures. As it is accepted that the Kathmandu Valley metal sculptors are the inheritors of the Pala-Sena artists, likewise it could be that the ‘Tamang’ style is a continuation of these eighth to twelfth-century Bihar and Bengal regional styles. Whereas Pala art is traceable to Gupta art, these unsophisticated Bihar and Bengal bronzes are not, and may have their roots in a regional art idiom.

According to an informant, a Tamang lama, the Tamang people came to Nepal with the Tibetan conqueror, King Song-tsen-gam-po in the seventh century. They were part of the cavalry or as others say, they were horse traders. The king ordered them to settle in the border areas, to protect Tibet and to cultivate the land. the Tamang all adhere to the Old Schools of Tantric Buddhism.

The ‘Tamang’ bronzes do not show any affinity either with Kashmir Buddhist bronzes or with North West Indian folk bronzes. This is not to say that they never exhibit any outside influence. Unquestionably some ‘Tamang’ bronzes do display features of Nepalo-Tibetan origins, for example, the elongated eye. As these bronzes do not try to imitate a hierarchic style we cannot call these icons a sub-style. Nor can we categorize these products as folk art, as it shows that when worked more precisely the artists were able to create bronzes of great artistic merit. The ‘Tamang’ bronzes should rather be viewed as a parallel style.

The ‘Tamang’ bronzes are not heavily decorated. The majority of them are not gold-plated. The ornamentation on garments is kept very sparse. The forms are generally sober, there is an economy of line. The torso is elongated. In general, the volumes and curves of the body of Nepalese statues are more full and round than those of ‘Tamang’ bronzes. Compared to Nepalese bronzes they look dispassionate. Only the pattern of the aura shows a break with the tradition of sober ornamentation; it has movement and the forms are elaborate.

On all the old bronzes I saw, the aura was made by following the repousse technique. Only later, especially in the Nineteenth century, is the aura made by the lost wax technique become stiff and flat. The most primitive-looking statues have bulging eyes while in other bronzes the contour of the eye is circular but with a short line inside to suggest the eyeball. In other statues the contour of the eyes is elongated and the line suggests the eyeball is long.

The headdress is extremely stylized. In contrast to Tibetan bronzes, the head does not show any traces of paint. As a rule, except for Plate 10, the sculptor omits any suggestion of hair. At the back, the head looks bald, except for the standing hair knot. Inside the bronzes, the husk has been removed, because, as is the custom with Tantric Buddhist statues, they have to contain consecrated materials. Once the statue is filled with sacred materials it is sealed with a wooden plaquette. Some statues display a hole at the back of the head, also with the purpose of containing consecrated materials.

In their bronzes, the Tamang have a preference for portraying the historical Buddha, Padmasambhava, Vajrasattva, Avalokitesvara, and Tara, while in their paintings they depict wrathful deities. ‘Tamang’ bronzes display a stylization of devotional features.


The bronzes are made by the following two techniques: the repousse technique and the lost was technique. Many statues show a combination of both techniques: the torso and arms are made of lost wax and the lotus by repousse. Some repousse parts are so solid and perfectly beaten and polished that they give the impression of having been made by the lost wax technique. The various pieces are assembled and held together with the help of pins. 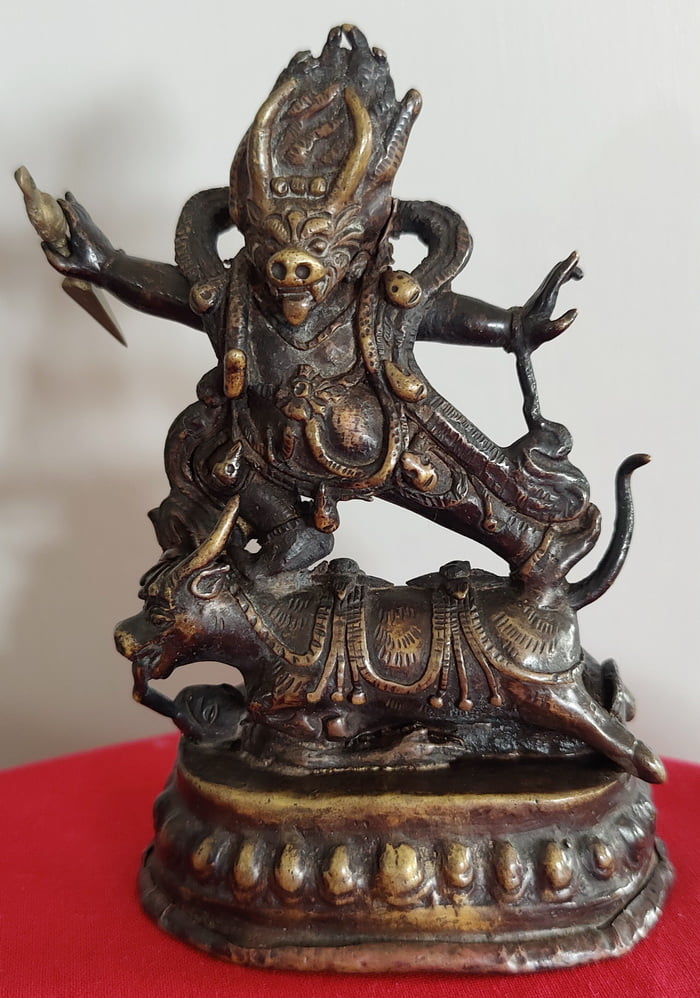