About Burmese Pali Palm leaf Manuscripts and how they were made: The palm leaf was used widely in Cambodia, India, Indonesia, Burma, Nepal, Sri Lanka, and Thailand. There are many varieties of palm trees, however, the leaves of two species were mainly used for writing and painting. These are the Palmyra palm (Barassus Flabelifer Linn) and Talipot palm (Coryoba Umbraculifera Linn). 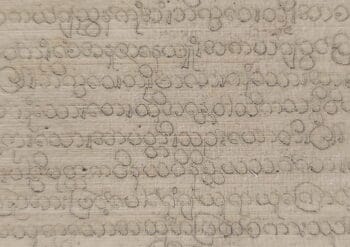 Before palm leaves could be used for writing or for illustrations, they had to be processed in many steps, and the technique varied from one place to another.

When the colour of the leaves changed to yellow, they were washed with fresh water and then dried in the shade. In Thailand, after the removal of their stiff ribs, they were cut to uniform size and placed between two wooden boards forming a bundle and then kept in a special kiln. After this process a blackish-coloured oil residue covered the leaves, this black deposit was removed with a cloth, and then the leaves were made smooth with hot sand.

Colouring the leaf before painting or writing was not a common practice in India, Nepal, or Sri Lanka, but in Thailand, the leaf was often coloured or decorated before it was written.

In Myanmar, a coat of lacquer was applied to the leaf and using a stylus incised then rubbed with black soot to enhance the incised letters. There were two major techniques for writing or illustrating on palm leaves, namely:

By using an iron stylus, writing and illustrations were incised on the prepared leaf. In this stage, however, writing was not legible. Black paint was prepared by mixing lamp soot or charcoal powder with oil. It was then applied on the surface of the palm leaf. The excess paint was then wiped off with a cloth. Through this process, the black paint was deposited in the incisions allowing the written words to be easily read.

For storage, palm leaves were kept between two wooden boards; holes were pierced into every palm leaf and a cord or bamboo stick was passed through the hole so that leaves were kept in position. Very often these wooden boards themselves were painted or decorated with thayo lacquer or inlaid mosaics, rare gems and ivory

There are various types of deterioration defects that develop in palm-leaf manuscripts. The major defects are:

For the removal of stains and spots from incised palm leaves, water can be used. For the surface of written manuscripts, a non-aqueous solvent like ethyl alcohol, acetone, etc. has to be used.

Trichloroethane has also been recommended for cleaning palm-leaf manuscripts. Discoloration of the palm leaf could be caused by various reasons, like oxidation, accumulation of dirt, or frequent application of oil. Incised leaves can be cleaned by applying the dilute detergent solution. For the removal of oil, a mixture of acetone and ethyl alcohol is recommended.

Insects are probably the greatest enemies of palm leaves. A detailed survey of insects living on palm leaves indicates that the only insects feeding on them are gastrallus indicus (a book worm). One of the remedies available for the control of insects is fumigation with insecticides. It is reported that fumigation of palm-leaf bundles is best achieved with paradichlorobenzene at 65% relative humidity.

Normally, the fungus is not found in palm leaves. However, if it is noticed, it can be cleaned off with swabs moistened with ethyl alcohol. Fumigation with thymol is also helpful.

Due to age, palm -leaves become fragile and brittle. Old leaves can easily break into pieces. The edges of a palm leaf become so weak that it easily crumbles at the slightest touch. The main cause for the loss of flexibility is the breaking down of the structure of the leaf.

In order to impart to the leaf, the original suppleness/flexibility and also an insecticidal deterrent an oil such as citronella, camphor, or lemon grass oil is applied onto its surface with a piece of soft cotton cloth. The excess oil must be wiped off with a dry piece of cloth.

Often, there are tiny holes eaten by insects in palm leaves. To repair these holes, fibers of mulberry tissue paper can be used. An adhesive like diluted Mowicoll is mixed with fibers. Big holes or broken edges can be repaired by using materials like thick Japanese tissue paper or natural wood paper veneer or unused palm leaf.

Another defect often noticed in palm leaves is the cleavage of the surface layer from the main body of the leaf. This type of cleavage is due to the breaking of the bond between various layers. Sometimes, the surface layer of one leaf gets stuck to the adjoining leaf. For repairing the separated layers, an acrylic emulsion adhesive is used. After the adhesive is applied with a thin brush and the separated layer becomes fixed back.

The fading of writing on palm-leaf is another very common defect. In the case of incised leaves, fading is found because of the loss of the ink or the carbon black which was used to fill the incisions. By the application of carbon black mixed with lemon grass oil, the written words can be visible again.

In the case of surface-written or surface-painted manuscripts, illegibility occurs because of the flaking of ink or paint. The leaf surface is not absorbent and therefore, the paint or the ink flakes off easily. Nothing can be done to restore this type of loss. However, to prevent the paint and the ink from flaking off, a protective coating of polyvinyl acetate solution or acrylic lacquer can be helpful.


To store palm-leaf manuscripts for longevity, the best way is to keep the whole bundle of palm leaves between two wooden boards in the traditional way to prevent the accumulation of dust, each bundle should be wrapped in a piece of acid-free hand-made paper. For longevity, an insecticide chemical like Paradichlorobenzene should be placed in storage cupboards.

This is an excellent and concise paper about the Burmese Pali Palm leaf manuscripts how they were made and their preservation.

It is known that the Pyu people (4th – 9th Century) of Myanmar used palm leaves for writing Buddhist scriptures and although there are no actual surviving palm leaves surviving, gold plates in the shape of palm leaves with inscriptions have been found in Sriksetra, the ancient city near Pyay ( Prome ).

The five kinds of palm-leaf manuscripts are:

The oldest library extant in Myanmar is in Bagan (old name Pagan), built by King Anawratha (12044-1077 AD), the first Myanmar King who embraced and converted to Buddhism.

There appears to be no other record of a palm-leaf manuscript surviving for more than 350 years in Myanmar, due mainly because of the harsh tropical climate and improper storage, insect and rodent damage, fires, fungus, and human destruction. The use of palm leaves as writing material gradually ended with the introduction of printing presses, to Yangon in 1816, Innwa (Ava) in 1837, and to Yadanabon (Mandalay) in the 1870s.

In times gone by professional scribes were known as Kyaung-Sa-Ye (monastic scribes). The scribes used a writing table about two feet in height with a cloth cushion knob on the writing table on which to rest the hand. The letters were engraved on the palm leaves by using a pointed iron or stylus pen.

A paper is written by Dr. Thaw Kaung “Unearthed Story of Myanmar History: Preserving Myanmar Manuscripts”. Dr. Kaung was born in 1937 and was a university librarian, historian, and leading authority in Asian library studies, specializing in the preservation and archival of traditional documents, including palm-leaf manuscripts. 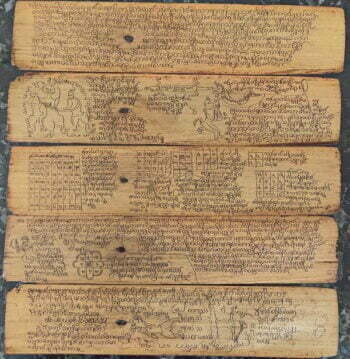 The contents are almost always of an astrological and religious nature combined with illustrations of cabalistic squares or signs composed of mystical figures and characters in a grid, medical prescriptions, or mantras accompanied by written notes. The contents of these manuscripts are usually a mix of folk mythology combined with Buddhist teachings.

The writing implements used were made from the stem of a type of grass, in Burmese called da-yin-gauk. Before the use of paper, a pi or quill fitted with a copper wire or steel tip was used to write common letters, summons’ and letters of information on parchment and leather. The more important letters were written on a tiger skin.

In Myanmar, when a child is born an astrological chart is drawn up where the birth date is calculated along with many other factors. These calculations take into account the day of the week the child is born, the location of the stars, moon, and sun, and the time of birth in accordance with the Myanmar lunar calendar.

These Calculations are referred to as Zartar, stemming from the Pali word Zati, which means birth. The name of the child is given by the astrologer.  The name of the parents along with all the information that the astrologist has calculated is then inscribed onto a palm leaf with a stylus. After the palm leaf has been inscribed it is rubbed lightly with oil, this acts as a deterrent to insects and rodents and also gives the palm leaf a nice colour with the script more pronounced.

Many people in Myanmar still place a lot of faith in Zartar and believe that the time and day of their birth greatly influences their life. The name given by the astrologer at birth is also important to the parents as they believe that the name, he or she is given can affect their behavior, lifespan, and many other aspects of their life.

Each day of the week in the Myanmar horoscope represents an animal, so the child born on the day assigned to the particular animal is believed to possess some of the characteristics of that animal.

The seven birth signs included in the Zartar depend on the day and year of birth and are believed to have an influence on one’s fate.

Zata are always kept carefully in a safe place by the parents, sometimes in a room dedicated to worshiping the Buddha, and is given to the child when he/she is old enough to take care of it.

During childhood, the parents will often take their children’s zatar to a fortune teller or astrologer to learn more about the health of their child or further predictions related to their future. This particular horoscope could be one that has had additional information added as the child grew, some of the drawings would indicate a married couple. Some of the drawings would also indicate that there is some Buddhist connotation.

The astrologer’s calculations take into account the circumstances of the birth, and the time he or she was born, and a prediction is based on his calculations. Many people in Myanmar also consult with astrologers over other matters such as illness, marriage, and a host of other life situations.